Queen Mio was the form that Mio Kuroki assumed in the Special Act of the live-action series.

Queen Mio's character design reflects her status as queen of the Dark Kingdom. She wore a striped bodice accented with hearts, accompanied with a hot pink skirt. She also wore a pair of black gloves and stockings with a pair of ankle-high boots. Further accessories include a pink, fur-trimmed cape, a skull-capped wand, and her plush dog Choppi. A common theme of her wardrobe is a Valentine heart.

Queen Mio had the plan of kidnapping Mamoru, and then marrying him because she needed a king. Usagi later found out about it, as she and Mamoru were kidnapped and imprisoned by Queen Mio. However, when the fake Shitennou show up to get Mamoru, Usagi saves Mamoru and tells him to run. But Mamoru tells her to run instead because if she escapes he might find a way out of the prison and she does so. But the fake Shitennou take Mamoru to Queen Mio. She use magic to put a spell on Mamoru, causing him to forget about Usagi. On the day when Queen Mio is about to marry Mamoru, Usagi gets Mamoru back, and Queen Mio becomes angry and sends her fake Shitennou to get them. However, the real Shittenou shows up to beat up the fake Shitennou who later turned out to be Pierrots. Later, Queen Mio turns herself into a giant Youma, and fights with Prince Endymion and the Shitennou, as they began to weaken. Then, Sailors' Moon, Mercury, Jupiter, Venus then performed Sailor Planet Attack, enough to destroy her. 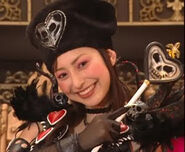 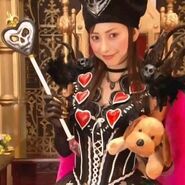