Queen Beryl is named after a mineral of the same name.

Queen Beryl has long, wavy fire-red hair that reaches her waist, dull orange eyes that, instead of having whites, has a pale yellow, and her eyelids are smeared over with a warm cocoa brown, and dark-purple lips, along with pale skin. She is shown always wearing a simple, form-fitting dark-purple dress, with the top of her dress pointed in towards her neck, and a background of black. She wears a silver armlet and a bracelet, along with two small horns peeking out from her shoulders. She is also adorned with a forehead crest, shaped like a black, upside-down boomerang, with two white dots up and down, along with a turquoise stone wrapped around in gold strips and similar earrings. She is also shown to have particularly point fingernails that are painted dark red.

Beryl was an Earth sorceress of a lower rank who fell in love with Prince Endymion but her love went unrequited. She became obsessively jealous of finding out his love for Princess Serenity. Beryl was later corrupted by Queen Metalia, who had detected malice in her heart.

Her possession led her to revolt against the Moon Kingdom and disobey the orders of Prince Endymion. When the prince tried to persuade his people not to fight against the people of the moon, Beryl killed him with a sword. She, in turn, was then filled with the Holy Blade by Sailor Venus, but it was too late to win the war when Princess Serenity committed suicide after Endymion's death.

After the events in the Moon Kingdom everyone was reborn on Earth, Beryl included. Beryl, a normal woman then, found the ruins of the Dark Kingdom at D Point and reawakened Metalia, thus making Beryl remember her past and make her evil again. She corrupted the four Shitennou and got them to do her bidding. She was determined to find the Silver Crystal and control the world and make Endymion rule beside her. Later, Kunzite killed Mamoru (the reincarnation of Prince Endymion), kidnapped him and took him to Queen Beryl. She then re-awakened him and brainwashed him to make him find the Silver Crystal. When the Sailor Guardians found out that Mamoru was brainwashed, a battle began at Game Center Crown. Using her hair to bind Sailor Moon and choke her, she tried to get the secret of the Silver Crystal from her. Sailor Venus remembers what Beryl did in her past life and conjured the Holy Blade once more. Sailor Jupiter used the sword to cut Beryl's hair and free Sailor Moon. After this, Sailor Venus stabs Queen Beryl in the torso with the sword. Beryl reaches out to Endymion, remembering her unrequited love for him in the Silver Millenium, as she dissolves into dust.

Art of Queen Beryl from the Materials Collection 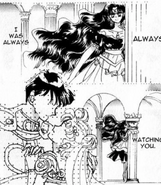 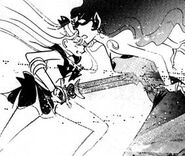 Queen Beryl's death
Add a photo to this gallery