Queen Beryl is named after a mineral of the same name.

Queen Beryl's appearance in the musicals kept a similar appearance to her manga and anime counterparts, her hair was either curled or frizzy but it was always red and she always wore a purple dress.

She first appeared in Dark Kingdom Fukkatsu Hen and its revised edition, and in those musicals, her personality and backstory were very similar to that in the anime. She was revived by the energy of hatred in people's hearts and sought revenge after her defeat at D Point; first, she revived the Shitennou and the DD Girls, then used the Youma Manegin to attack the Inner Sailor Senshi as she disguised herself as a fortune-teller. After capturing Tuxedo Mask and luring the Sailor Senshi back to D Point, she once again defeated them and confronted Sailor Moon directly. Aided by the spirit of her guardians, Sailor Moon used Moon Princess Halation to seal Beryl away, but before she disappeared Queen Beryl swore that hatred would always allow her to be resurrected indefinitely.

In all of her later appearances, Beryl was much more similar to her manga counterpart. In the musicals, The Eternal Legend and its revised edition, Beginning of the New Legend, Starlights ★ Legend of the Falling Stars, and The Advent of Princess Kakyuu – The Second Stage Final, she was revived by Sailor Galaxia to force the awakening of Sailor Saturn, similar to Queen Nehellenia's revival in the 90s anime. In Beginning of the New Legend Galaxia, Galaxia gave Beryl the Amazon Trio as underlings, while in Starlights ★ Legend of the Falling Stars she appeared with the original Shitennou, and then worked with a new group of Shitennou in The Advent of Princess Kakyuu – The Second Stage Final. Galaxia promised Beryl revenge against the Sailor Senshi and domination of the Earth, and in many of those musicals, she gave Beryl a mud puppet of either Prince Endymion or King Endymion as a way to persuade the Queen to join her. When Beryl eventually discovered that she was only being used, she turned on Galaxia, and the puppet attacked both the Queen and Sailor Moon, eventually killing Beryl as she shielded Sailor Moon with her own body. When she died, Beryl forgave her old enemy and said she realized that without love and the Moon Princess, the world would disappear.

In the musicals, Beryl stated that she was once the Queen of the Earth who loved her planet and, had it not been for the Moon Princess, she would have just been a normal queen. More than once in the musical storylines, Sailor Pluto saved her from Galaxia, stating in the song "A Woman's Controversy" that she also loved Mamoru in the future and sympathized with the Queen for that. 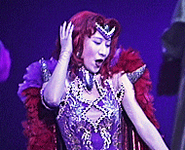 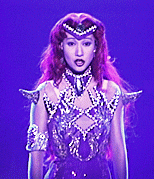 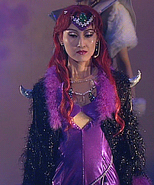 Beryl from Starlights - Legend of the Shooting Stars

Beryl as the Phantom of the Music Hall

Beryl from The Advent of Princess Kakyuu 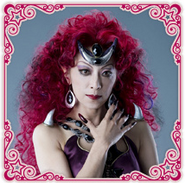 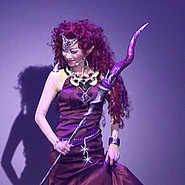 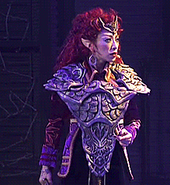 Beryl in armor from La Reconquista 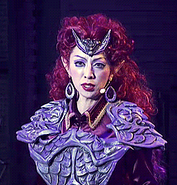 Makoto Aikawa as Queen Beryl
Add a photo to this gallery