D Point at the North pole

Commander of the Dark Kingdom

Having Prince Endymion all to herself

Utter chaos and destruction
Her mistress and advisor, Queen Metalia

The people of the Moon

Queen Beryl has long wavy red hair and red eyes. She wears a long purple dress and red high heels. Beryl has a black tiara on her forehead, a bracelet on each wrist, a silver belt, earrings, a necklace, and horn on each shoulder.

Queen Beryl first appears in the 2nd episode, asking her loyal minion Jadeite when he was going to bring her the Legendary Silver Crystal, stating that they need more life energy to revive their great ruler, and ordering him to continue collecting the life-force energy of humans.

In the 3rd episode, Beryl scolds Jadeite for failing twice, explaining to the Shitennou that the Silver Crystal has vast and immeasurable amounts of magical, mystical energy, and the person who possesses it shall rule the world. She then tells the shocked Shittennou not to worry about it for now.

She next appears in Act 5, venting, calling the Sailor Senshi meddlesome, as her forces have neither the Silver Crystal nor enough energy to revive their leader. She orders Nephrite out to go carry out his plan.

In Act 6, looking in her crystal ball, she exclaims to Kunzite the current situation is no laughing matter, and that the Silver Crystal belongs to the Dark Kingdom. She orders Zoisite to carry out his plan to get the Crystal and life energy from humans.

Later in the act she personally appears in front of Sailor Jupiter, Sailor Mercury, and Sailor Mars, proclaiming herself Queen Beryl, the commander of the four Dark Kings (Shitennou). Stating that she'll obtain the Silver Crystal at any cost so she may build the Dark Kingdom on Earth, she swears that all the Senshi (and humans as well) shall perish. When Sailor Moon appears before her, Beryl states she, too, shall kneel before her power. When Sailor Moon, uses her new attack, Moon Healing Escalation, in an attempt to kill her, it hits Zoisite instead. Swearing the Sailor Senshi shall pay, Beryl, carrying a defeated Zoisite, returns to the Dark Kingdom.

In Act 7, Beryl is shown giving energy to Queen Metalia, which Metalia states is not enough; Metalia also requests the Silver Crystal, to which Beryl replies the Sailor Senshi keep getting away. Beryl remembers how she was led by a force to the Dark Kingdom and released Queen Metalia. However, she has no intention of relinquishing the Silver Crystal to Metalia; once she has it, the planet is hers. She then sends Zoisite on another mission.

In Act 9, she appears, telling Kunzite to capture a currently unconscious Endymion, and attacks the Sailor Senshi.

In Act 10, the Four Dark Kings, eavesdropping on a conversation between Beryl and Queen Metalia, discover they were once righteous knights who served under Endymion in their past lives but were used by Beryl before they regained their memories. Beryl, however, discovers them, puts them back under her control, and sends them to Earth to freeze Tokyo and obtain the crystal from Usagi.

In Act 11, Queen Beryl appears hidden behind Endymion's cape in the Sailor Guardians' hidden headquarters. She gloats, having finally achieved the vast powers of the Silver Crystal, stating the Sailor Guardians are of no further use to her and asks if the Princess is prepared to fight Endymion.

In Act 12, she viciously attacks the five Sailor Senshi, using her blood-red hair to entangle and restrain them; Sailor Venus uses the Sword of the Silver Crystal to free them and attempts to attack Beryl directly, but she shields herself from the attack. Sailor Moon grabs the blade, using it to shatter Beryl's necklace, a gift from Queen Metalia which gave her power. Once the necklace shatters, Beryl is stripped of the evil strength given to her by Metalia; she dies by crumbling into ashes, but not before recalling how she tried to sneak out and see Prince Endymion, whom she secretly cared about and wanted all to herself.

She can also use her prehensile hair, causing it to grow, ensnare, and electrocute the Sailor Senshi.

A page on Queen Beryl in the Sailor Moon Crystal Book

Queen Beryl with the life energy of humans

Queen Beryl talking to her mistress and advisor, Queen Metaria 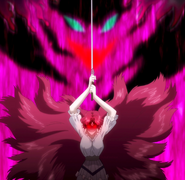 Beryl in the old days of Silver Millennium, watching over the man she loved - Prince Endymion
Add a photo to this gallery