Ptilol is the twin of the villain Cyprine.

Ptilol is the red version of Cyprine.

Ptilol appeared when Sailor Moon tried to destroy Cyprine with Moon Spiral Heart Attack. Instead of perishing, Cyprine was split into twins, one being Cyprine, the other being Ptilol. After Sailor Moon powers up into Super Sailor Moon, she is destroyed by Sailor Moon's Rainbow Moon Heartache attack.

She returns in episode 35 with the other Witches 5, and is destroyed for good by Sailor Neptune with her Submarine Reflection attack. 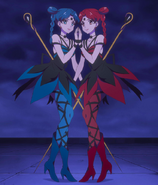 Retrieved from "https://sailormoon.fandom.com/wiki/Ptilol_(Crystal)?oldid=226892"
Community content is available under CC-BY-SA unless otherwise noted.