Humanoid alien
Princess Snow Kaguya is the main villain from the manga short story, The Lover of Princess Kaguya and the second movie, Sailor Moon S: The Movie-Hearts in Ice.

Princess Snow Kaguya is a powerful alien being of unknown origin. She travels by comet to different planets freezing them and making part of her "collection". Earth has always been her most saute after prize and her intention is to cover the Earth in snow and ice to make it part of her "collection" of snow-covered planets. Long ago in ancient times, she tried to cover the Earth in ice, but failed when the Silver Crystal melted the ice and saved the planet. As a result, Princess Snow Kaguya was forced away and has since frozen countless other planets but her desire for Earth never went away.

Eons later in modern times, she has once again made her way to Earth to try again. A piece of her comet has been lost and she cannot proceed without it. She sends her minions, the Snow Dancers, to search for the missing shard.

A young astronomer named Kakeru Ohzora finds the shard and keeps it in his observatory. It attaches itself to his life force, and begins slowly stealing his energy, causing him to become very ill. Princess Snow Kaguya appears before him at his observatory to retrieve her comet shard, and he becomes entranced by her, believing that she is the mystical Princess Kaguya. She takes the shard, but because it is linked to his life force, he is brought even closer to death when it is taken.

She throws the shard into the ocean and creates an enormous ice crystal that will continue to draw away Kakeru's vital life energy until he dies. She and her Snow Dancers then begin to freeze the Earth. The Senshi attempt to stop her, but none of their attacks seem to work. All of the nine Sailor Soldiers' combine their powers to activate the Silver Crystal's full abilities, which obliterates Princess Snow Kaguya, her Snow Dancers, the ice crystal in the sea, and her comet.

In the manga, Princess Snow Kaguya is all white apart from the bottom of her skirt which gradients to yellow. In the movie, she has blue skin with a white headdress and skirt. Kaguya wears no top, has a long flowing skirt, a transparent shawl and an intricate headpiece. The crystal on her skirt is similar to her comet shard.

She has power over ice and snow, and as a result she can create frost,sleet, hail, frostbite, flurries and cold. She can command massive snowstorms and blizzards to form on Earth, and commands Snow Dancers as her servants. she can also emit two circular bursts of snowy energy from her cold hands at her target. Her ultimate attack is a massive blast of energy she fires from her torso.

The crystal she desires greatly amplifies her frigid abilities as well as its own. 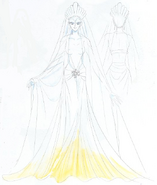 Art of Princess Snow Kaguya from the Materials Collection 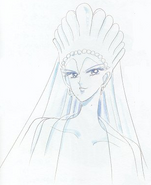 Salome, the sculpture that inspired Naoko to make The Lover of Princess Kaguya and Princess Snow kaguya
Add a photo to this gallery
Retrieved from "https://sailormoon.fandom.com/wiki/Princess_Snow_Kaguya?oldid=238558"
Community content is available under CC-BY-SA unless otherwise noted.