Princess Serenity was the Princess of the Silver Millennium and the daughter of Queen Serenity. She is the previous incarnation of Sailor Moon. Her guardians and closest friends were Sailor Mercury, Sailor Mars, Sailor Jupiter, and Sailor Venus.

Princess Serenity shares the same appearance with her reincarnation, Usagi Tsukino; she has blue eyes, long hair styled in two buns with flowing pigtails (though her hair was a silvery-white color as opposed to Usagi's blonde), and a golden crescent moon on her forehead to mark her status as a member of the royal family of the Silver Millennium.

From what was seen of Princess Serenity in flashbacks, she was shown to have a personality similar to her reincarnation, being somewhat of a crybaby who loved to spend time with her friends and with the boy she loved, along with shirking her studies to goof off.

In the manga, Serenity was fascinated by the Earth. Even though she was given orders not to go to the planet, she secretly visited there and met Prince Endymion. The two then fell in love.

During the Dark Kingdom's attack which caused the Moon Kingdom's downfall, Prince Endymion died protecting Serenity. She fell into extreme grief due to Endymion's death and committed suicide. Serenity's mother, the Queen, sealed away the evil and the moon to save the rest of the solar system (as seen in Volume 3), though unfortunately, everyone involved on the moon perished.

Before her death, the Queen used the Silver Crystal to give her daughter and others another chance at life, hoping in particular that, this time, Serenity and Endymion could find happiness together.

Serenity looking up at Earth and remembering Prince Endymion.

Serenity peeking at the Earth prince

Serenity blushes when Endymion notices her. 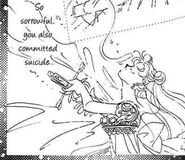 A different version of Serenity's suicide 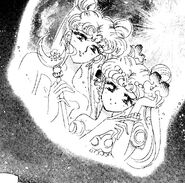 Princess Serenity with her mother

Serenity being scolded by the Inner Sailor Senshi after visiting Endymion

A Palladio dress made by Christian Dior in 1992. Princess Serenity's dress was based on this dress.

Retrieved from "https://sailormoon.fandom.com/wiki/Princess_Serenity_(manga)?oldid=230633"
Community content is available under CC-BY-SA unless otherwise noted.