Princess Kakyuu is the princess of the planet Kinmoku who had fled to Earth after her world was invaded and then destroyed by the possessed Galaxia, former Sailor Guardian of the Milky Way Galaxy.

"Kakyuu" (火球) can be translated to "fireball", "shooting star" or "comet".

"Koujo" or "Oujo" (皇女) is the Japanese term for "imperial princess".

Kakyuu Koujo can thus be translated to "Princess Fireball".

Kakyuu has long red-orange hair and dons a long deep red dress with blue in the bodice and puffy sleeves. She has a black crown and a blue ribbon around her neck that resembles a flower.

Her favorite color is reddish-orange. Her hobbies are playing cards and gardening. She is strong-willed and wise. Her weak point is hatred.

She is the ruler and future queen of the distant planet Kinmoku, and fled to Earth moments after her homeworld was destroyed, to find The Light of Hope that can defeat Galaxia. Fearing Galaxia, she hides in an incense burner, found and protected by Chibi Chibi. The Three Lights play their music to reach her, but to no avail, as she is doing her very best to remain hidden from Galaxia. Many times, her mystical scent of pure goodness and light was detected by the Three Lights whenever Chibi Chibi (who was in possession of her holy incense burner) was near them.

When Sailor Tin Nyanko releases a black hole and Usagi gets sucked into it, Chibi Chibi uses her incense burner to destroy it and Kakyuu finally appears, holding Usagi. She apologizes to the Starlights for not revealing herself sooner, even though she heard their songs to her. She tells the Super Sailor Senshi about the legendary and strongest Sailor Soldier and that she is now searching for the Light of Hope, and requests Usagi to help her.

However, Galaxia appears during a Three Lights' concert, engulfing the world in darkness and kills Kakyuu. Before she dies, she recognizes Chibi Chibi as the Light of Hope. Following the true Galaxia's healing, she reappears as her Star Seed is returned, and returns home to rebuild planet Kinmoku along with the Starlights

Kakyuu's appearance during Seiya's telling of the Three Lights' origins 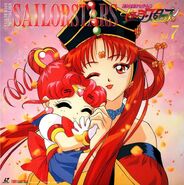 Retrieved from "https://sailormoon.fandom.com/wiki/Princess_Kakyuu_(anime)?oldid=233061"
Community content is available under CC-BY-SA unless otherwise noted.