Princess Kakyuu is the princess of Kinmoku.

"Kakyuu" (火球) can be translated to "fireball", "shooting star" or "comet".

"Koujo" or "Oujo" (皇女) is the Japanese term for "imperial princess".

Kakyuu Koujo can thus be translated to "Princess Fireball".

Princess Kakyuu retains the same appearance as her manga and anime counterparts.

She made her first appearance in Eien Densetsu and its revised edition and also made an appearance is in Kakyuu Ouhi-Kourin. Her final appearance was in Le Mouvement Final. 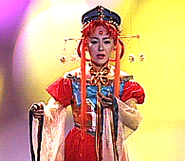 Ai Toyama as Princess Kakyuu
Add a photo to this gallery

Retrieved from "https://sailormoon.fandom.com/wiki/Princess_Kakyuu_(Sera_Myu)?oldid=229552"
Community content is available under CC-BY-SA unless otherwise noted.