Princess D is the princess of the Kingdom of Diamonds, the world's largest producer of gemstones.

She owned a well known, legendary treasure which Queen Beryl and Luna thought might possibly be the Silver Crystal and that she could be the Moon Princess. For a short time, she had been possessed Nephrite's youma shadow, which controlled her body into working for the Dark Kingdom. In the original manga, the crystal was later revealed to be a statue of Princess D, and in the revised manga the crystal was a a statue of D Kingdom's first princess. 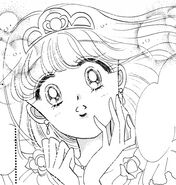 The princess without glasses in the manga.
Add a photo to this gallery
Retrieved from "https://sailormoon.fandom.com/wiki/Princess_D_(manga)?oldid=207742"
Community content is available under CC-BY-SA unless otherwise noted.