Returning Memories: Usagi and Mamoru's Past

Prince Endymion was the Prince of the Earth during the era of the Silver Millennium, and was the lover of Princess Serenity. In the 20th century, he was reborn as Mamoru Chiba.

Prince Endymion shares the same appearance as his reincarnation, Mamoru Chiba; he is a rather tall young man with short dark hair with a blue sheen, and blue eyes.

Endymion wears a long-sleeved dark blue bodysuit with a navy blue breastplate, a silver piece of armor that guards his waist and lower back with extended pieces to guard his hips, navy blue knee-high armored boots, and a black red-lined cape that was attached to his silver shoulder guards. Wrapped around his waist with a brown sash, was a hilt that housed a sword he would use in battle.

Endymion was the prince of a wondrous kingdom on planet Earth surrounded by hundreds of devoted, loyal subjects and the Shitennou who swore to protect him at cost of their own lives.

At some point, he had met and fell madly in love with the young Princess of the Moon when she snuck down from Silver Millennium to stay with him. At some point during their relationship, Princess Serenity gifted him a music box that played a soothing melody when opened. In the present day, Mamoru Chiba wound up with this music box somehow. After losing it, Usagi Tsukino took it into her possession.

When war escalated between the two kingdoms, he swore to aid Queen Serenity defend her kingdom and people from the evil invasion of the bewitched Queen Beryl, who was working with the evil universal force, Metalia. Sadly, he was murdered along with his beloved Serenity.

After Queen Serenity utilized the full strength of the Silver Crystal to seal away Queen Metalia, she also had Endymion, Serenity, and the Sailor Senshi reincarnated on Earth to live peaceful lives.

In the present day, Endymion had been reborn as Mamoru Chiba, who would take on the identity "Tuxedo Mask" in order to find the Silver Crystal so he could regain his memories. He would also appear to haunt Mamoru with nightmares about the Moon Princess, asking him to find the Legendary Silver Crystal. After the Silver Crystal finally appeared, and he and Sailor Moon were revealed to be Prince Endymion and Princess Serenity, and he was kidnapped by the Dark Kingdom and brainwashed by Beryl and Metalia to serve them. Endymion focused on trying to obtain the Silver Crystal from Sailor Moon, with a rocky partnership with Kunzite.

Unlike the last Shitennou, Endymion actively avoided killing Sailor Moon, because of his love that existed beneath the mind control. He remembered the music from the music box Usagi still had on her, before he released a trapped spirit in the lake. He was sent to use the dark crystal to capture the people who were reborn as the Seven Great Youma, but Sailor Mercury stopped him and destroyed the crystal. Sailor Moon used the Silver Crystal to heal him, but he was captured again by Beryl, to be brainwashed again.

By the time Sailor Moon reached the Dark Kingdom at D-Point, Endymion was nothing but a mindless drone of Beryls and ruthlessly attacked Sailor Moon, with after she failed to heal him with the Silver Crystal and she hurt him badly with Moon Tiara Action. Before he could kill her, she played the music box and his memories began to return to him and by the time he touched it, he was freed from the villains' control. Furious at losing Endymion again, Queen Beryl threw a large stone pillar at Sailor Moon, but Endymion threw a rose, imbued with the love he had for Serenity, at it, shattering it and striking Beryl. He was fatally hit by the shards while protecting Sailor Moon and Beryl fled as she was mortally hurt by the rose. He died in Sailor Moon's arms and was resurrected after Sailor Moon destroyed Metalia and Beryl.

Prince Endymion seemed to possess no special abilities or magical powers of any kind, but carried a large sword as a weapon to brutally wound his enemies. He did, however, throw a rose at Queen Beryl, which appeared to be imbued with the power of his love for Princess Serenity; this rose was powerful enough to stun her and likely the origin of Tuxedo Mask's powers.

As the evil Dark Kingdom brainwashed warrior also known as Endymion, he seemed to possess more powers and abilities than in his normal form. In his evil form, he briefly took control of the Black Crystal, as well as possessing the ability to seemingly transform at will between the forms of Mamoru Chiba, Tuxedo Mask, and into the appearance of Prince Endymion. He also used the Black Crystal to absorb the Seven Great Youma in the hopes of returning them to Beryl. After Metalia brainwashed him for a second time, he appeared to become even stronger, completely resisting the healing effects of Moon Healing Escalation and attacking with no hesitation, as well as surviving a direct strike from Moon Tiara Action to his abdomen (although this did weaken him severely, it did not kill him).

He was also able to throw black roses, which had an almost identical effect to the ones thrown by Tuxedo Mask, although they were used against the Sailor Senshi. Once, one of these black roses wrapped Sailor Moon in vine-covered black roses and began electrocuting her.

A settei sheet of Prince Endymion. 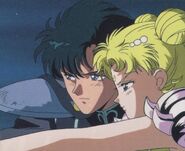