Prince of the Earth

Prince Endymion was the previous incarnation of Mamoru Chiba and the prince of the Earth before the kingdoms on both the Earth and the Moon were destroyed.

Endymion wears white, and after obtaining this form it becomes Mamoru's primary combat form. He gains the power of teleportation, a power shared by the Four Kings of Heaven. After he takes Metaria into his body, the armor and accessories turn black and he becomes known as Metalia Endymion. He also gains a shroud and black versions of the accessories the Kings wears. Remnants of the white armor can be seen underneath. 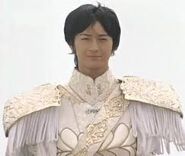