The cover of the DVD release of the English dubbed movie

Luna trying to get up while she has cold.

"I know what you mean," says Minako. "I miss my first boyfriend too." 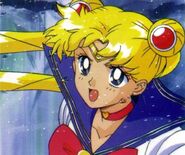 Sailor Mercury remembers what Artemis said about the Silver Crystal

The Sailor Senshi about to perform Silver Crystal Power.

Luna as a human with Kakeru.