Information revealed that the musical would be a new story, recounting the battles between the Sailor Senshi and the Dark Kingdom, who seek the Silver Crystal.

Naoko Takeuchi was involved with the auditions for the cast.

Apparently, the tickets were sold for 6800 yen (about 68 to 70 US dollars), but sold out a few days after the musical was announced.

The plot was very similar to the plot of the first arc of the manga, but with many changes.

The musical begins with the Lemures Leader and the lemures doing a musical number at the Game Show (Overture ~ Welcome! To The Game Show!). After the number, the Inner Sailor Senshi, in civilian form, came and play different games on the TVs at the Game Show, with one of the games being I Am Your Cupid, a fortune-telling game that features the members of Momoiro Clover Z. After the Sailor Senshi finishes playing the games, The Lemures Leader introduces them to a new dating sim game titled "Pandemic Love", which features the upcoming boy band Pandemic 4, who are really the Shitennou in disguise. The Pandemic 4 then arrive to sing their new song, Erosion Boy.

After everyone leaves, Queen Beryl appears and sings a song (Revival! Queen of Tragedy). Afterwards, the Shitennou appears once again to explain that they have been gathering energy through their Pandemic Love game.

All the Shitennou's List
Add a photo to this gallery

Note: There were no performances on September 17, as the actresses were taking a break that day.

Merchandise relating to the "La Reconquista" musical began appearing in late August 2013. Some of the merchandise will only be sold at the musical. 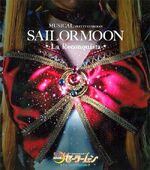 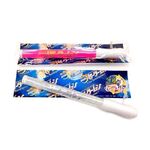 La Reconquista pen lights. These pens are available in white and pink. Sold at the musical for 1000 yen. 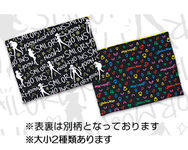 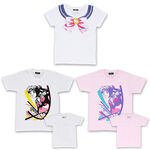 Pop art t-shirts. Sold during the musical for 3150 yen each.
Add a photo to this gallery

The DVD cover/jacket.
Add a photo to this gallery

In early September, it was announced on Karatetsu's website that Karatetsu, a karaoke box chain, will add some Sera Myu songs to their list of songs to sing. This collaboration took place on September 10 and it ended on the 13th. The event also took place at three of their stores. The songs were:

A poster about the collaboration.

Sailor Moon themed menu.
Add a photo to this gallery

A poster showing the main cast.

A poster including only the Inner Sailor Senshi.

An official poster for the musical that featured silhouettes of the Senshi.

A poster with the Sailor Senshi, the Dark Kingdom, and Queen Serenity.

A poster showing the main Sailor Senshi.
Add a photo to this gallery

Jamie as Queen Serenity
Add a photo to this gallery
Villains

Mayumi as the Lemure Leader
Add a photo to this gallery

Retrieved from "https://sailormoon.fandom.com/wiki/Pretty_Guardian_Sailor_Moon_-_La_Reconquista?oldid=222367"
Community content is available under CC-BY-SA unless otherwise noted.