Petite Pandora is an agent of the Dark Agency, and a character in the Codename: Sailor V manga. She is the younger sister of Pandora. She was determined to get many fanboys under her control to fight Sailor V in revenge for her sister's death. However, she is petty, unwilling to put Gurikazu Amano under her control because she didn't want a nerd as her slave.

It is also possible that Petite Pandora had red hair, purple eyes and a white dress like her older sister.

Petite Pandora only appeared in Chapter 4 of the Codename: Sailor V manga. After learning of her older sister's death, she sought revenge and planned to kill Sailor V. Using her trademark wink, the "World's Cutest Wink", she only brainwashed attractive men in order to get revenge. She was later defeated by Sailor V's Crescent Beam, and her stench was purified by Venus Power, Love Crescent Shower.

Like her sister, Petite Pandora has strong hypnotic abilities. She was able to resist Sailor V's Crescent Beam, though it did cause her flesh to melt, and it released a toxic gas which could have killed everyone in the area, had Sailor V not finished her off.

Petite Pandora with her sister Pandora 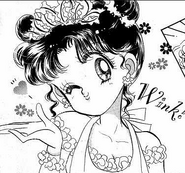 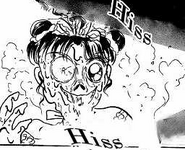 Petite Pandora being destroyed by Venus Power, Love Crescent Shower
Add a photo to this gallery