Pegasus is one of the main characters of Sailor Moon SuperS. His true form is Helios: the guardian of the Golden Crystal and the holy priest of Elysion.

Helios entered Chibiusa's lovely dreams as Pegasus to hide while he searched for the person who could activate the Golden Crystal's full strength and power. Queen Nehellenia captured Helios's physical body while his dream self existed in Chibiusa's dreams. He lived on Earth in Elysion, where he protected and watched over the sweet dreams of the people on Earth, as well as the Golden Crystal itself.

Pegasus is a white horse with a pair of white wings and has a golden horn which it the Golden Crystal. As Pegasus, he is the dream form of Helios. He took on that form when he is inside Chibiusa's dreams or when he assists Super Sailor Moon and Super Sailor Chibi Moon. The Golden Crystal is the horn on Pegasus' head.

Pegasus was originally a young boy named Helios who was the revered high-priest of Elysion, and Guardian of the mystical Golden Crystal of Dreams and whose duty was to keep it from falling into the hands of any evil being. When confronted by the evil and envious Queen Nehelenia, Helios was captured by the evil Queen of the Dead Moon and taken prisoner. He then transferred his spirit to a person's sweet and beautiful dreams for refuge. In them he took on the form of a white horse with feathered wings to stay hidden from the Dead Moon until he could locate the one who could unleash the full power of the Golden Crystal. This is when the events of SuperS begins.

The Dead Moon Circus targets many people as they search their Dream Mirrors for him and he gives Usagi and Chibiusa weapons to fight them: the Moon Kaleido Scope and the Crystal Carillon. Super Sailor Chibi Moon uses hers to call Twinkle Yell to summon him so that he can power Super Sailor Moon's Moon Gorgeous Meditation which she uses to destroy many Lemures.

Heilos as Pegasus with Chibiusa 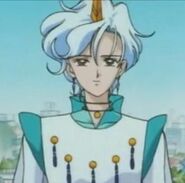 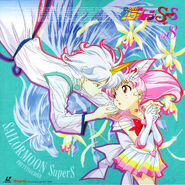