Panic in Nakayoshi World is a video game released by Bandai for the Super Nintendo game console in 1994.

This is one out of three games, featuring other characters from Nakayoshi magazine along with Sailormoon characters. The four girls: Kurumi (from Kurumi to 7 Ninnokobitotachi), Nagisa (from Chou Kuseni Narisou), Sailor Moon and Wapiko (from Kingyo Chouuihou) have volunteered to help the Blue-Haired Princess of Nakayoshi World to drive the wicked King Daima and his monsters out of Nakayoshi World.

The story mode is divided into five stages, with six rounds in each stage. The first 4 rounds of each stage are puzzle rounds; the fifth is a bonus round and the sixth is a boss fight. The heroines' objective is to help the princess and their friends by fighting off the monsters that threaten them in each of the places where they are hiding. 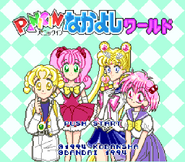 Title screen
Add a photo to this gallery
Retrieved from "https://sailormoon.fandom.com/wiki/Panic_in_Nakayoshi_World?oldid=221388"
Community content is available under CC-BY-SA unless otherwise noted.