Nipas is a droid sent by Berthier to take over a Crystal Point in Tokyo. She uses ice-based attacks and can freeze people with her breath.

Nipas, in human form, took over Bob-Floy, an ice cream shop located on a crystal point. Anyone who ate her ice cream would fall under her spell and she would freeze them solid. When Artemis discovered this, Berthier and Nipas found him and froze him. Sailor Venus and Luna came to stop her but Nipas froze Luna as well. Sailor Moon, Sailor Mars, and Sailor Jupiter also arrived at the scene to fight Nipas and she nearly froze them all until Sailor Mercury (who was going to Germany to study and become a doctor but decided against it at the last minute) arrived and hit Nipasu with her new attack, Shine Aqua Illusion, and Sailor Moon then destroyed her with her scepter, freeing Artemis and Luna. 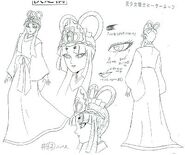 Nipas in her human disguise. 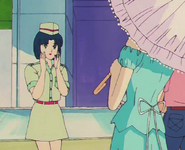 Nipas and Berthier.
Add a photo to this gallery

Retrieved from "https://sailormoon.fandom.com/wiki/Nipas?oldid=226913"
Community content is available under CC-BY-SA unless otherwise noted.