Nergal is a character who appeared in the video game Bishoujo Senshi Sailor Moon: Another Story.

She is the Oppositio counterpart of Sailor Mars. She is named after the Babylonian God of Fire. Nergal is a power-hungry woman who values might above all else and serves Shaman Apsu only to become more powerful. 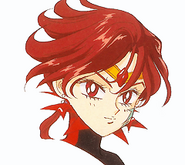