Nephrite is the second of the Shitennou to be introduced in the Sailor Moon manga.

Nephrite is named after a variety of jade of the same name.

He has thick and wavy maroon hair that reaches his mid-back and dark blue eyes. He wears the standard Shitennou uniform with gold trim, a black belt, and black boots.

Nephrite was the second of the four Shitennou to appear in the manga succeeding his fallen comrade Jadeite. He is the commander of the North American division of the Dark Kingdom. After Jadeite's death and subsequent preservation/burial in a glass coffin, Nephrite appeared in Queen Beryl's throne room, asking to be allowed to take over the mission to gather energy and locate the Silver Crystal. Upon her approval, Nephrite vows to avenge his death and begins his mission appearing in the third act of the manga. Thinking that the "magnificent treasure of the D Kingdom" was the Silver Crystal, Nephrite plots to steal the jewel from its owner Princess D who was visiting Tokyo. He used his shadow to possess Princess D at a party. Princess D grabbed the jewel and ran off with it as well as draining the energy of her party's guest at the same time. the three Sailor Guardians confronted Princess D, but Nephrite's Soul Shadow leaves her and is then destroyed by Sailor Moon's Moon Twilight Flash attack.

In Act 5 of the manga, he again makes use of his shadow, but this time possessing a mannequin that comes to life as a “ghost bride” kidnapping men and stealing their energy. The “ghost bride” who is being controlled by Nephrite manages to manipulate Motoki Furuhata through brainwashing, who in turn tried to drain Makoto Kino's energy. When Sailor Moon, Mercury, Mars arrived, Makoto snaps out of her trance and realizes that she has been tricked. She is infuriated by the trickery and transforms for the first time into Sailor Jupiter after having a Transformation Pen thrown at her by Luna. Nephrite reveals his presence to the four girls and is incapacitated by Sailor Jupiter's Flower Hurricane attack. He is finally eliminated with a lightning blast from her tiara. After Nephrite died, he transformed into a hard type of jade that is dark green in colour. That type of jade by coincidence is also called Nephrite.

Later, when the Silver Crystal appeared, it was revealed that during the Silver Millennium, Nephrite and the other Shitennou originally were not evil - they served under Prince Endymion as his Guardians and advisors. They were, however, tempted by the power of the Dark Kingdom (like most other humans), and fell to it. They eventually become good again, and their spirits advise Mamoru when he needs their help.

Art of Nephrite from the Materials Collection 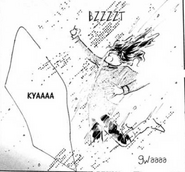 Nephrite's death
Add a photo to this gallery
Dark Kingdom
Retrieved from "https://sailormoon.fandom.com/wiki/Nephrite_(manga)?oldid=239238"
Community content is available under CC-BY-SA unless otherwise noted.