Nephrite is the second of the Shitennou to be introduced.

Nephrite is named after a variety of jade of the same name.

His appearance is similar to anime and manga.

Although Naru did not formally appear in the earlier musicals, she was mentioned in Sailor Moon - Gaiden Dark Kingdom Fukkatsu Hen by Nephrite in regard to his love for her. 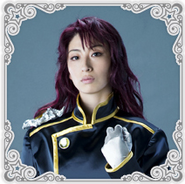 Koro as Nephrite
Add a photo to this gallery