Neo-Queen Serenity is the queen of Crystal Tokyo as well as all of Earth in the 30th Century. She is the beloved wife of King Endymion and the mother of Small Lady.

She wears an altered version of the dress she wore as a princess, with the shoulder pieces omitted and a large, wing-shaped bow replacing the smaller one of the princess outfit. Her blonde hair is much longer. She also wears a crown and new earrings. The crescent moon is always visible on her forehead, just as it was with her princess form. Her face and facial expressions are drawn to look more mature than the 20th century Usagi, but her iconic hairstyle is retained.

In the anime and manga series, this form is the one that Chibiusa considers as truly being her mother, while Usagi of the past is regarded as more of a big-sister figure and many characters often mistake them for sisters. Although aware of the situation, Chibiusa rarely does this. Unlike her past self, who speaks in a higher pitch. Neo-Queen Serenity speaks in a normal voice with a matured tone.

In the second season, it is revealed that Usagi, as Serenity, will eventually become the queen of a new Silver Millennium called Crystal Tokyo, which will already exist in the 30th century; where the Earth and the Moon coexist in harmony and prosperity. She is first seen in this future form in Episode 68 of the anime. Usagi learns that she will be given the title "Sovereign of Earth" and Mamoru will become King Endymion alongside her.

She becomes Neo-Queen Serenity after warding off a second Ice Age, though the specifics of this are never discussed. This incarnation is shown to be more mature than the present-day Usagi, though she still has her moments—in Episode 104, Chibiusa gives the Senshi a letter from the future, in which the Queen asks them to train her—the letter is simplistic and contains almost no kanji. This proved that even after centuries of taking the Moon Kingdom throne, she still cannot write fluently in kanji. Also, in Episode 146, Diana says that the King and Queen sometimes play sick to get out of things. Letters she sends through the Space-Time Door to Chibiusa are sometimes signed with a drawing of herself (and sometimes King Endymion) instead of a name.

However, in both manga and anime versions, it is clear that the world becomes reformed under her powers, ridding the known world of evil and sickness. This caused her, and the rest of the people of earth to become extremely long-lived with extended longevity of living for hundreds or thousands of years. The immeasurable and vast power of the Legendary Silver Crystal keeps the city of Crystal Tokyo stabilized (in the manga, King Endymion says that they can live up to about one thousand years). Sailors Uranus, Neptune, and Pluto refer to her as the "Messiah of Peace" or the "True Messiah" standing opposite to the Messiah of Silence, Mistress 9.

Neo-Queen Serenity's first initial appearance when she was attacked by the powers of a Dark Crystal and was put into a deep sleep and was protected by the Sailor Guardians by creating a protective shell which it was mentioned by King Endymion as he explains to Sailor Moon and the others about the Dark Moon Clan. She was soon awakened from her deep sleep in Episode 81 when Sailor Moon uses her Silver Crystal from her brooch to disperse Black Lady's dark powers and she tries to reason with Chibiusa to remember the good times she had in the past. When Black Lady attacks them, Neo-Queen Serenity was doing her best to put her daughter Chibiusa back to normal as she tells her about being steamed from their parents who became bitter and sympathetic and it was the parents' job to set limits not to make their children turn ruthful and selfish and using her Silver Crystal to remember Chibiusa her good memories which lead Black Lady to hug her mother knowing they loved her as she returns to Chibiusa.

Neo-Queen Serenity returns when Sailor Moon decides to defeat Wiseman as her Silver Crystal glows to transform as her as both clashes their powers between a Dark Crystal and the Silver Crystal. Things seem to be not enough as her daughter Chibiusa transforms into Princess Small Lady Serenity both use their Silver Crystal to destroy Wiseman once and for all. After the incident, she became impressed with both Chibiusa and her past self about their bravery. Neo-Queen Serenity is last seen reuniting with her daughter Chibiusa with King Endymion and the Sailor Guardians at Crystal Tokyo.

Although she never makes a direct physical appearance after the events of the second season, Neo-Queen Serenity sends Chibiusa to the past to train under the Sailor Senshi as an even stronger and more experienced Sailor Chibi Moon by the time she returns and also giving Chibiusa some advice about the training as a Sailor Senshi before she allows her to return to the past. She often sends notes or letters with a small drawing of herself as well as her handwriting which Usagi's friends also recognize Usagi's handwriting. In Sailor Moon SuperS, she was mentioned by Diana when she was sent by them to see their daughter Chibiusa who spent time with her past self and her friends. 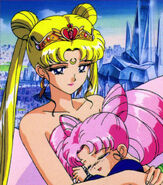 An obscured view of Neo-Queen Serenity 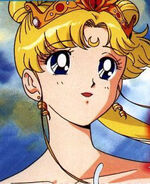 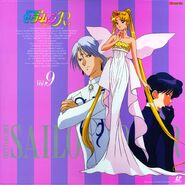 Retrieved from "https://sailormoon.fandom.com/wiki/Neo-Queen_Serenity_(anime)?oldid=228159"
Community content is available under CC-BY-SA unless otherwise noted.