Neo-Queen serenity has a similar appearance to her manga and anime counterparts. In earlier musicals, her appearance was similar to how she looked in the anime (no sleeves, blonde hair, larger crown) while in the later musicals, she looks more like her manga counterpart (silver hair, sleeves). In some appearances, she has shiny, multicolored wings whereas sometimes she doesn't.

In the musicals, Chibiusa sometimes complained that her mother nagged her to her homework, ironically just the way Ikuko nagged Usagi to do her homework a thousand years earlier. 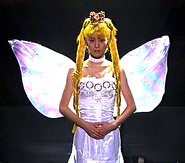 Retrieved from "https://sailormoon.fandom.com/wiki/Neo-Queen_Serenity_(Sera_Myu)?oldid=225374"
Community content is available under CC-BY-SA unless otherwise noted.