"Nakayoshi and Issho" is a video game released for the Nintendo game console in 1993 by the shojo manga magazine Nakayoshi.

The villain Rakira has stolen the pens of the creators of Nakayoshi's most famous titles; Goldfish Warning, Pocket Park, MinMin, Taiou ni Smash! Kurumi-chan to Shichinin no Kobitotachi and Sailor Moon, which is the longest and most difficult. The combat is luck-based and saving the game can be difficult at times. 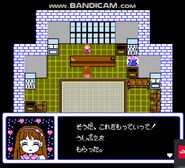 Retrieved from "https://sailormoon.fandom.com/wiki/Nakayoshi_and_Issho?oldid=221483"
Community content is available under CC-BY-SA unless otherwise noted.