Nabu is a character who appears in Sailor Moon: Another Story

Nabu was the name of the Babylonian god of wisdom, who was associated with the planet Mercury.

She is the Oppositio counterpart of Sailor Mercury. Named for the Babylonian god of wisdom. Nabu feels that the Silver Crystal's power will not last forever, a feeling which Shaman Apsu reciprocates. 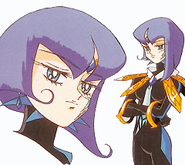 Nabu's Full Body Profile
Add a photo to this gallery

Retrieved from "https://sailormoon.fandom.com/wiki/Nabu?oldid=226088"
Community content is available under CC-BY-SA unless otherwise noted.