In the "New Cover" manga reprints of 2003-2004, the attack Moon Frisbee was renamed Moon Tiara Boomerang to match its name in the live-action series; as the Kodansha manga used the reprint as its basis it also used this name.

Sailor Moon pulls off her tiara, and it gets larger. She then pulls it back and shouts, "Moon Tiara Boomerang!" As she says these words, the tiara gathers its energy and begins to sparkle. She then throws the tiara at her opponent in a manner reminiscent of a boomerang.

She performed this attack in the second the same way as in the manga.

In the Sailor Moon Crystal, Sailor Moon touches her tiara and as it shines, it comes off from her head and suddenly lands in her hand as a circle boomerang. Later it begins to spin and shine, and as Sailor Moon shouts, "Moon Tiara...", she turns, and as about to throw the tiara, Sailor Moon continues and ends the attack by shouting "...Boomerang!" and throws the tiara to the enemy.

In the Nogizaka46 version, Sailor Moon used this attack against a group of Youma under Zoisite's control. 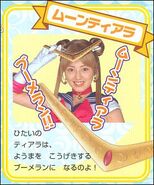 Retrieved from "https://sailormoon.fandom.com/wiki/Moon_Tiara_Boomerang?oldid=225526"
Community content is available under CC-BY-SA unless otherwise noted.