Jupiter, the Powerful Girl in Love

The "Moon Stick" is an item used by Sailor Moon in the first season of the 90s anime. She used this item to perform the Moon Healing Escalation attack. The Moon Stick became more powerful after the Silver Crystal was attached to it. The previous owner of the Moon Stick was Queen Serenity.

The Moon Stick didn't exist in Pretty Guardian Sailor Moon. Instead, a weapon very similar to the Moon Stick, the Moonlight Stick was used.

In the manga, the Moon Stick was similar in appearance to the one in the anime but the crescent moon was light blue instead of gold.

In the 90s anime it was a bright pink-colored stick with a golden crescent moon-shaped decoration on the bottom, a jewel and a crescent moon shape near the moon end, and a gold crescent moon on the top. The item was given to Sailor Moon by Luna in episode 25. In a flashback scene in episode 44, Queen Serenity said that it could only be used by a descendant of the Moon Kingdom.

The item itself was a point of conflict in the first season, as the other Sailor Senshi doubted Usagi's responsibility to use it properly. In episode 28, it fell out of Usagi's bag as she hurried to catch up with Naru and nearly landed in a river. Luna returned it to her later and warned her to be more careful.

In episode 34, the Silver Crystal appeared and attached itself to the stick. This was the final form of the Moon Stick that Sailor Moon used to defeat Queen Beryl in episode 46. After this battle, the Moon Stick was never seen again.

In episode 48, Sailor Moon attempted to summon the Moon Stick but failed. Later in episode 51, the item was replaced by the much stronger Cutie Moon Rod.

In the 90s anime, the Moon Stick had an alarm within it that went off whenever a Rainbow Crystal carrier came near it.

In Sailor Moon Crystal, the Moon Stick was similar in appearance to the one in the 90s anime but the crescent moon was light blue instead of gold, and the underneath part is more detailed and doesn't have a bow on it.

When the Silver Crystal appeared, it could be used in conjunction with the Moon Stick. The Moon Stick was before owned and used by Queen Serenity and can be used only by descendants of Moon Kingdom.

The Stick has the same appearance as in the manga.

The Moon Stick with the crystal intact. 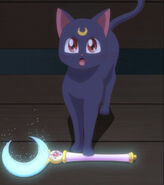 Luna presents the Moon Stick to Sailor Moon, marking her as leader of the Inner Sailor Guardians.
Add a photo to this gallery

Retrieved from "https://sailormoon.fandom.com/wiki/Moon_Stick?oldid=234046"
Community content is available under CC-BY-SA unless otherwise noted.