The "Moon Mask" is the mask that Sailor Moon wore in the early chapters of the manga. She first wore this mask when she transformed in Act 1 Usagi - Sailor Moon.

She used them once in the first act to see Naru in danger. After which, whenever she transforms, she tosses off the mask before fighting, until Act 8 where the mask (aside from one minor use in Act 15) no longer appears for the rest of the series.

The goggles looked like Sailor V's mask but they were white instead of red.

The mask as seen in early concept art in the art books. 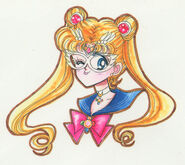 Retrieved from "https://sailormoon.fandom.com/wiki/Moon_Mask?oldid=232946"
Community content is available under CC-BY-SA unless otherwise noted.