Start a Wiki
Template:InfoboxCharacterMinako Aino is the anime version of the character Minako Aino who appears in the Sailor Moon anime. She is the civilian identity of Sailor V and the present-day incarnation of Sailor Venus.

Minako is very ditzy, almost as much as Usagi and is very idealistic. She often makes references to old proverbs or sayings but misquotes them. She hates studying and wants to become an idol. Her hobbies include chasing idols, singing and volleyball.

Minako retains the same appearance as she did in the manga. Minako is a cute and bubbly 14-year-old (15 by the S season, and 16 in Sailor Stars) teenage girl with blond hair and blue eyes. She wears a big red bow in her hair.

Minako's past was shown in episode 42. Before she began to fight with the senshi, Minako had spent some time in England fighting the Dark Kingdom as Sailor V. There, she fell in love with a man named Alan. On one of her missions, she met a woman named Katarina, who was an Interpool police officer. The two spent time together, Katarina taught her English, and Minako regarded her as a big sister. During a mission, she (as Sailor V) was caught in an explosion, and Katarina believed that she died. Minako escaped, but saw Alan and Katarina together, seeing that the two loved each other and became a couple without despising it. Minako decided to let the two believe that she was dead, and moved back to Japan soon after.

Minako (in civillian form) finally appears in episode 33. There, she meets up with the other Sailor Senshi and saves them from one of Kunzite's traps. Here, Minako is shown to be completely devoted to her mission of fighting the Dark Kingdom and finding the Moon Princess, as she has the strongest memories of her past life as a Sailor Soldier.

Later on in episode 42, Katarina returns and is being used by Kunzite as a youma to get to Sailor V, considering he believes Sailor V knows who the Sailor Senshi are. After she is restored by Sailor Moon and Sailor Venus, Katarina and Minako reunite and become friends again.

After the first season concludes, Minako's character and personality becomes more goofy, excitable, and overdramatic, as well as a bit ditzy. She is known to misquote proverbs on a regular basis.

In Sailor Moon S, Minako was the last one of the Inner Senshi to have her Pure Heart Crystal stolen. Even though it said it didn't bother her, it annoyed her greatly. She began to donate tons of blood in order to prove she had a good heart, and her Pure Heart was eventually removed by Eudial. But unlike the other victims, Minako retained her conscienceness and ran off with her Pure Heart, and she eventually collapsed. After she regained conscienceness, she transformed into Sailor Venus (much to the surprise of Eudial), and broke Eudial's fire buster with her Venus Love-Me Chain attack. 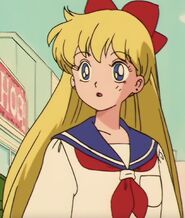 Add a photo to this gallery
Minako and a drink.jpg 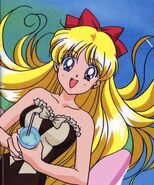 Retrieved from "https://sailormoon.fandom.com/wiki/Minako_Aino_/_Sailor_Venus_(anime)?oldid=40594"
Community content is available under CC-BY-SA unless otherwise noted.