Her personality was silly pretty much all the time. She could serious at times like specifically in episodes 42, 100, and 109, where she worried that she did not have a Pure Heart and tried to prove she was pure-hearted in some very bizarre ways.

She was also infamous for using mixed up proverbs in the anime and officially referred to herself as "The Goddess of Love," a title which she used to try to solve others' love woes. Similar to Usagi, she was an academic underachiever, and would refer to Usagi at times as her "make-up tests partner."

She's much more athletic than Usagi, especially when it came to volleyball. This was best demonstrated in episode 108, in which she was able to converse with relative fluency in English at the party. Although all students in Japan are required to learn English, it's more likely because of the time she spent as Sailor V in London in the anime. However, she has her thick British accent.

Minako is caring towards others and yet, like Usagi, pretty clumsy at times. For example, when every other Sailor Senshi got sick in Sailor Moon R, she tried to take care of them, but just ended up making a mess. The more she tried to straighten things out, the worse it got.

Minako is a cute and bubbly 14-year-old (15 by the S season, and 16 in Sailor Stars) who originally lived in London. She has blonde hair and blue eyes. She wears a big red bow in her hair. Her Shiba Koen Junior High School uniform includes a white blouse with sailor neckerchief, a red scarf, blue skirt, white socks, and black Mary Jane shoes.

Her most notable casual outfit from both second until the fourth season, she wears a red leather jacket with a light purple shirt and an orange collar, green pleated denim skirt, white socks, and sneakers. In one episode, her leather jacket had a minor color change from red to lime green.

In Sailor Stars, she wore the same school uniform as Usagi, Ami, and Makoto since all four of them were attending the same high school. Minako is described to be about 5'2" in height and possibly a bit taller in later seasons.

Sailor V's uniform was different than the other Sailor Senshi's uniform. In place of a tiara, she wore a red mask, but unlike her manga counterpart, there is no crescent moon on her forehead. Instead of a leotard, she wore a sleeveless midriff shirt with red accents on the sides that sometimes revealed her stomach. She wore a white choker with a crescent moon, her collar was navy blue with two red stripes. Her shoulder pads were white, armor-like, shoulder guards, her bow was red while the center of her front bow was orange, and her gloves were like Sailor Venus's: white with orange elbow fittings. Her skirt was blue with a red border, her back bow was blue, her shoes were blue with ankle straps, and her red ribbon from her civilian form was carried over into her Sailor Senshi form.

As Sailor Venus, she wore the standard Sailor Senshi uniform. The dominant color of her uniform was orange while the accent colors were yellow and navy blue. Her choker, collar, the center of her front bow, the elbow fittings on her gloves, skirt, shoes, and earrings were orange; the gem on her tiara and her back bow were yellow and her front bow was navy blue. She had one stripe on her collar, and her shoes were orange heels with ankle straps. Also, her red hair bow from her civilian form was carried over into her Sailor Senshi form.

After she gained her "Super" upgrade from Pegasus, her choker had a gold star attached to it, her collar had one stripe, the bottom of her shoulder pads became translucent, her back bow was enlarged and lengthened, the center of her front bow was a heart, and her earrings became a darker color. Also, like her previous Sailor Senshi form, her red hair bow was carried over into her Sailor Senshi form.

As revealed in episode 42, Minako lived in London, England. Before she moved to Japan and began to fight with the Sailor Senshi as Sailor Venus, Minako originally lived in London to fight the Dark Kingdom as Sailor V. There, she fell in love with another man named Alan. On one of her missions, she met a woman named Katarina, who was an Interpol police officer. The two spent time together, Katarina taught her English, and Minako regarded her as a big sister. During a mission, she (as Sailor V) was caught in an explosion, and Katarina believed that she died. Minako escaped, but saw Alan and Katarina together, seeing that the two loved each other. Minako decided to let the two believe that she was dead, and moved to Japan soon after.

Minako (in her civilian form) finally appears in episode 33. There, she meets up with the other Sailor Senshi and saves them from one of Kunzite's traps. Here, Minako is shown to be completely devoted to her mission of fighting the Dark Kingdom and finding the Moon Princess, as she has the strongest memories of her past life as a Sailor Soldier. From then on, she officially joined Sailor Senshi.

Later on in episode 42, Katarina returns and is being used by Kunzite as a youma to get to Sailor V, considering he believes Sailor V knows who the Sailor Senshi are. After she is restored by Sailor Moon and Sailor Venus, Katarina and Minako reunite and become friends again.

After the first season concludes, Minako's character and personality become more goofy, excitable, and overdramatic, as well as a bit ditzy. She is known to misquote proverbs regularly.

During this season, Minako was shown to greatly care for others. She looked over a class of kindergarten kids. She also tried to take care of the other Sailor Senshi when they were all sick, though to no success.

In Sailor Moon S, Minako was the last one of the Inner Senshi to have her Pure Heart Crystal stolen. Even though it said it did not bother her, it annoyed her greatly. She began to donate tons of blood and giving away the plush toys she won at the arcade to prove she had a good heart, and her Pure Heart was eventually removed by Eudial. But unlike the other victims, Minako retained her consciousness and ran off with her Pure Heart, and she eventually collapsed. After she regained consciousness, she transformed into Sailor Venus (much to the surprise of Eudial), and broke Eudial's fire buster with her Venus Love-Me Chain attack.

She is the first victim to escape the imprisonment of her dream mirror which Tiger's Eye and Hawk's Eye were fighting over after she manages to deceive them both during their two-timing date. Minako transforms into Sailor Venus and furiously scolds at both Tiger's Eye and Hawk's Eye from looking both her hearts and dreams (After both had looked on her Dream Mirror to think Pegasus was present) and angrily hits them with Crescent Beam Barrage to chase them away, allowing Super Sailor Chibi Moon to summon Pegasus with Twinkle Yell as well as destroying the two Lemures from Super Sailor Moon's Moon Gorgeous Meditation. She along with the other Senshi were upgraded to their Super forms by Pegasus.

She almost breaks her friendship with Makoto due to their crush with Mr. Honjo until they were attacked by the Lemure sent by CereCere. By the time everyone is ensnared by the Lemure, CereCere was confronted by JunJun, VesVes, and PallaPalla who were deceived by her deceptions which allows Artemis to inform both Minako and Makoto to channel their energy with their Crystal Change Rods to transform to their Super Senshi forms. Super Sailor Venus demonstrates her Venus Love and Beauty Shock to disperse the Lemure while Super Sailor Jupiter demonstrates her Jupiter Oak Evolution to disperse most of the leaves to rescue the kids including their friends making both reconcile their friendship. After the Lemure was defeated by Super Sailor Moon, both Makoto and Minako reconciled their friendship and to discover that Mr. Honjo was Kotaro's father, much to their disappointment and realizing he was married. 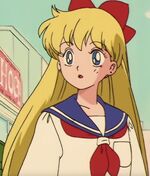 Minako makes her first appearance in the anime, in episode 33.

Minako with Katarina and Alan.

Minako in the first opening
Minako Aino began to fly.png
Minako is preparing to fly.

Minako flying through the sky.

Minako and the other members of the Inner Senshi watching Usagi cry in episode 56.

Minako and Chibiusa as nurses.

Minako with Luna and Artemis.

Minako and Rei at the beach.

The Inner Senshi about to transform outside Hikawa Shrine.

Minako in an apron.

A view of the left side of Minako's room.

A view of the right side of Minako's room.

Minako helping with the goldfish-scooping tent in episode 103

Minako in her swimwear in Episode 114

They both gaze out.jpg

Minako in her pajamas

Minako in her Butterfly Idol dress

Minako in the Sailor Stars opening

Minako in her daydream with the Three Lights

Minako, Rei, and Makoto daydream about the Three Lights

Minako celebrates her joy of being on the volleyball team

Minako with the Three Lights

Minako in her school uniform (part 1)

Minako in her school uniform (part 2)

Minako in her summer uniform

Minako in casual clothes from episode 38

Minako in skiing clothes from episode 38

Minako in casual clothes from episode 39

Minako in skating clothes from episode 39

Minako in casual clothes from episode 51

Minako in casual clothes from episode 64

Minako in her swimsuit from episode 67

Minako in casual clothes from episode 90

Minako in dress clothes from episode 93

Minako in casual clothes from episode 97

Minako in casual clothes from episode 98

Minako in casual clothes from episode 99

Minako in her pajamas from episode 100

Minako in her volleyball clothes from episode 100

Minako in her yukata from episode 103

Minako in casual clothes from episode 109

Minako in casual clothes from episode 122

Minako in her "Butterfly Idol" outfit from episode 154

Minako in casual clothing from episode 183

Minako in her swimsuit from episode 183

Minako's facial expressions (on the left)

Minako on the cover of her R single

Minako on the cover of her Stars single