"I am the Pretty Guardian who Fights for Love and for Beauty! I am Sailor Venus. In the name of Venus, I'll punish you with the power of love!"
— Sailor Venus' stock introduction

Minako Aino (愛野 美奈子, Aino Minako) is the civilian identity of Sailor V and the present-day incarnation of Sailor Venus (セーラーヴィーナス, Seeraa Bu~iinasu). She is the 5th Sailor Senshi to be introduced and join the Sailor team. She is also the real leader of the Inner Sailor Senshi.

Minako retains her appearance from the manga and anime with her long blonde hair and a signature red bow.

Sailor Venus' appearance is similar to her manga and anime appearances.

In the musicals, Minako's character was not explored in as much depth as in the other versions, but her personality generally matched that of her anime counterpart: overly loud at times, a little obsessive, and slightly perverted. She was always true to her mission as a Sailor Senshi, however, and would do what was necessary to protect her friends. Sailor Venus had one image song, "Traditional the Grace ~Ai no Arashi~".

Minako, along with the other members of the Sailor Team, arrives at the game show to play a couple of games. While there, Minako finds a romance app called I Am Your Cupid. She and the Sailor Team get their phones out and play the app. After playing it for about a minute or so, the team gets bored with it. 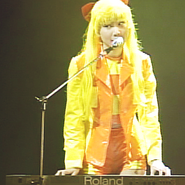 Shiori Sakata as Minako Aino.
Add a photo to this gallery 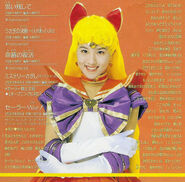 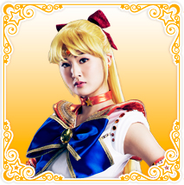 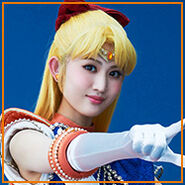 Add a photo to this gallery
Sailor Senshi

Retrieved from "https://sailormoon.fandom.com/wiki/Minako_Aino_/_Sailor_Venus_(Sera_Myu)?oldid=239392"
Community content is available under CC-BY-SA unless otherwise noted.