Start a Wiki
"The Guardian of Love and Beauty, Sailor Venus! In the name of Venus, I'll punish you!"
— Sailor Venus's stock introduction

Minako Aino is the civilian identity of Sailor V and the present-day incarnation of Sailor Venus.

Like the other members of the Sailor Guardians, her appearance in PGSM differed greatly from her appearance in the original manga. In this version, Minako has brown eyes and straight black/brunette hair with fringe/bangs. She doesn't wear her signature red bow until she transforms into Sailor Venus.

Sailor V in PGSM has the same appearance as the manga and anime version.

Venus obtains her original look, like Sailor V. Unlike in the anime, but like the manga, Sailor Venus has chains around her waist for her Venus Love-Me Chain attack. Like the other Sailor Guardians, her hair changes color when transforming (from brown to blonde).

Minako Aino is a popular teen idol and singer. She uses references to her life to title her songs. For example, her second album is titled "Venus" and her most popular song is "C'est la Vie" which is a pun on Sailor V.

Minako is a calm, quiet, and deeply solemn person who does not smile often. She is shown leading her double life as a pop singer and as a Sailor Guardian. She remains separate from the other four Sailor Guardians until she reveals herself and discards her Sailor V form for her true form, Sailor Venus. Even after this, she still distances herself from the other girls due to her frustration that they all lack focus, but mostly due to a terminal illness she harbors because she believes that if they become friends and she dies a probable death, they will become saddened by it, though later in series she confided with Rei and eventually became friends with the rest of the girls.

Minako in the live-action series was an idol singer. She is strict and calm, as well as smart and observant, but she also has a good sense of humor. Unfortunately, she has a disease and thought about getting surgery, but said: "the possibilities are around zero". Rei talked her into giving it a shot, and the rest of the Sailor Guardians planned a surprise party for her. Unfortunately, Minako died during surgery. Artemis first told Rei and she was just at a loss for words.

During that same episode, there is a scene with her singing at the party in an afterlife. Minako read a letter to her friends about her life and how much her friends meant to her. When Rei finished reading the letter she made in case she left, all of them around the table start crying. Minako was very devoted to her mission and past life and almost gave up singing for her mission; however, Rei talked her out of living in the past and live in the present. She was the closest to Rei among the Sailor Guardians.

Also in the live-action series, she had a rival named Mio Kuroki, whom she was suspicious of working for the Dark Kingdom. More than once, her jealous and uncaring behavior gave her away to Minako. She has warned Usagi several times to stay away from Mio because she will do whatever it takes to cause pain and suffering in her life. It is casually implied that despite her not wanting to make friends, Minako did care about Usagi's well being, though later in series she confided with Rei and eventually became friends with the rest of the girls.

Minako defeating Pierrots with her motorcycle

Minako with the Moon Sword 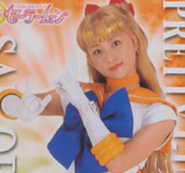 Sailor V on the DVD cover for Act ZERO.

Sailor Venus on the 2004 PGSM Calendar

Retrieved from "https://sailormoon.fandom.com/wiki/Minako_Aino_/_Sailor_Venus_(PGSM)?oldid=219956"
Community content is available under CC-BY-SA unless otherwise noted.