This article is about Minako's daughter that only appeared in a manga side-story. For her mother and one of the main characters of the main story, please see Minako Aino.

Mina Aino is the daughter of Minako Aino, who only appeared and existed in the manga alternate-universe side story, "Parallel Sailor Moon."

Mina looked exactly like her mother, Minako Aino but instead of a thick red ribbon, Mina wore a thin orange ribbon in her hair.

Towards the end of Parallel Sailor Moon, when the five girls transform into their Sailor Guardians forms, Mina's thin ribbon become a big ribbon like her mother's ribbon. It is also unknown what shoes she wears as a Sailor Guardian, but she wears the standard Sailor Guardians uniform (the colors on the fuku are unknown).

Mina was every bit as rowdy as her mother. At the cooking class she attended, she enjoyed bothering the older students.

Mina often went on "field trips" with her mother to see celebrities. Even though her father's name was never given, it was said that he worked on a sitcom.

Mina and her friends Ami Jr., Rei Jr, and Mako Kino all tolerated Kousagi Tsukino, Usagi's younger daughter, and attended a cooking class taught by Haruka, Michiru, and Setsuna. In the story, Mina was also a Sailor Guardian, but her name was never given. 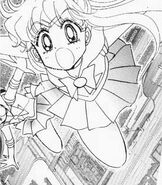 Mina as a Sailor Guardian

Retrieved from "https://sailormoon.fandom.com/wiki/Mina_Aino?oldid=211519"
Community content is available under CC-BY-SA unless otherwise noted.