Mimete is the second member of the Witches 5 to confront the Sailor Guardians.

The kanji in Mimete's alias surname translates as "feather" (羽) and either "pure", "raw", or "fresh" (生). Her given name translates to "beauty" (美) with the character after it (々) having no specific pronunciation, and it only indicates that the syllable before it is repeated

Mimete retains the same appearance that she had in the manga. In the anime, instead of wearing the Mugen Academy school uniform in the manga. She is mostly seen wearing a yellow long-sleeved coat and large red rounded glasses. She also wears a red shawl on her head and white gloves.

In the 90's anime, Mimete's personality is expanded on. Here, she has a significant dislike towards Eudial and often sabotages Eudial's efforts and plays mean pranks on her. She also has a notable interest in men, as most of her targets are male.

Her first unshadowed appearance is when she is overheard by Eudial saying that Professor Tomoe might want her to replace Eudial. She is also the one who put snails in Eudial's locker and tacks in her shoes.

On the island where Eudial sought out the Pure Hearts she knew were the ones they were looking for, Mimete put snails in Eudial's car and cut the brakes. When Eudial drove her car away after being defeated, the loss of the brakes caused her to crash over a cliff to her death.

After Uchoten was destroyed, Doctor Tomoe decided to give the next assignment to Tellu. Mimete overheard this and used a voice imitator to change her voice to Tomoe's and tell Tellu that the project was canceled. She then took Tellu's job, sending the Daimon U-Pasokon, but Sailor Moon destroyed her. Mimete then took out Eudial's Witches Electric Warp and entered it to appear on a giant TV screen, increasing her size and power. However, Tellu appeared, having found Mimete out for stealing her job, and explained that Eudial never used her power device because if the plug is pulled while she is inside it, she would be trapped inside forever. Tellu pulled the plug, consigning Mimete to an eternity of imprisonment in cyberspace.

Mimete talking to someone on the phone. 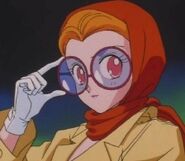 Mimete in her disguise

Mimete in civilian clothes in episode 114

Mimete on the big screen.

Retrieved from "https://sailormoon.fandom.com/wiki/Mimete_(anime)?oldid=232678"
Community content is available under CC-BY-SA unless otherwise noted.