Act 27 - Infinity 1, Premonition
"Protected by Neptune, the Outer Planet of the Seas, Guardian of the Deep Sea, I am Sailor Neptune. "
— Sailor Neptune's introduction

Michiru's surname (海王, kaiou) translates to "Sea King", based on the Japanese name of the planet Neptune (海王星, Kaiousei "Sea King Star", the given title of Neptune, the Roman god of the sea).

Michiru is an extremely beautiful and delicate-looking girl of slim stature and average height, with deep blue eyes and wavy teal hair that falls just past her shoulders. The epitome of elegance and femininity, she has an excellent sense of fashion, is always dressed smartly, and applying makeup or perfectly made up already. Usagi and Minako were both utterly dazzled by her beauty when they first saw her, and Usagi has gone as far as saying that Michiru is exactly what a fairy tale princess would be like.

Near the end of the Infinity arc and throughout the Dream arc Sailor Neptune's uniform was slightly altered. The sea-green gem no longer had gold accents to it but instead it was embedded in a yellow star. Her sailor collar now featured one white stripe. Her shoulder pads were nearly identical to the one in her form before but this time the last pad was more wing-like and translucent. her brooch was now heart shaped, and her back bow ribbons were now longer.

As Eternal Sailor Neptune, her outfit is almost completely altered. The gem on her tiara is now star-shaped. Her earrings are now sea-green studs with sea-green stars dangling from them. Her choker is now v-shaped with a yellow star in the center. Her sailor collar has a single gold stripe on it. Her brooch is now star shaped. Replacing her shoulder pads are short solid light sea-green bubble-like sleeves with sea-green bands at the end. Her gloves are heighted to be just below her bubble sleeves. her skirt is attached to her leotard with a sea-green belt with a lighter sea-green belt below it. A yellow star is connecting both belts in the center. Her skirt is in two layers with top being sea-green and the bottom being a lighter sea-green. Her back bow has been reverted to the one from her original form but this time it's a light sea-green with narrow, long, sea-green ribbons extending from it down to her knees. Her boots are now knee-length with sea-green colored v-shaped borders with a yellow star in the center.

During the Silver Millennium, Sailor Neptune was also the Princess of her home planet and was among those given the duty of protecting the solar system from outside invasion. As Princess Neptune, she wore a sea-green gown with the symbol of Neptune on her forehead. She dwelt in Triton castle.

Elegant, sophisticated, though sometimes cold and capable of sharp anger, she has been described by Sailor Moon as 'the ideal princess'.

Michiru attends Mugen Academy with Haruka Tenou and the younger Hotaru Tomoe. She is patient and caring, almost always offering a smile or laughter to a situation. While polite and calm to a fault, she is not the most social person, but when she does become close with someone it is because she truly wants to. She dislikes being patronized and will not indulge others.

This can make her look like a snob, and her seeming perfection at everything does not help this perception of her. She is a genuinely intelligent young woman, a prodigal violinist, and an artist, already famous for her endeavors. Her intelligence is also apparent through her acceptance to Mugen Academy, a school with a very high acceptance threshold; only geniuses of some field are permitted enrolment.

Michiru Kaiou can transform into Sailor Neptune by saying Neptune Planet Power, Make Up! Her attacks are centered around sea attributes.

In concept art, Naoko Takeuchi had planned for Michiru and Haruka to be affiliated with the Takarazuka Revue. Also, she was originally intended to wear a bow in her hair when at school. Neither characteristic was carried over to the final version of her development.

According to the Materials Collection, she had kindness "as great as the sea".

Sailor Neptune's character was not developed until partway through the Sailor Moon series after the other Sailor Guardians had already been established. When she was created she was made along with Sailor Uranus, the pair was meant to be "complementary but opposite characters", and were meant to work along with Sailor Pluto from the beginning. Sailor Neptune's visual design is made to evoke images of her element, the ocean. The choice of her colors along with the wavy quality of her hair, which Takeuchi even joked, might be thought of as seaweed hair.

The Outer Senshi introducing themselves in their Super Sailor forms

Princess Neptune
Add a photo to this gallery

The sailor senshi on the manga cover, volume 9 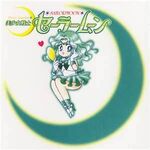 The Sailor Senshi on the Kanzeban manga cover, volume 10
Add a photo to this gallery

Sailor Neptune by Arina Tanemura
Add a photo to this gallery

Retrieved from "https://sailormoon.fandom.com/wiki/Michiru_Kaiou_/_Sailor_Neptune_(manga)?oldid=240723"
Community content is available under CC-BY-SA unless otherwise noted.