Michiru's name means "to rise" while Kaiou means "sea king." Her original English name Michelle a French feminine form of Michel, from the Hebrew name Michael means "Who is like God?"

Michiru is a young woman of high intelligence, wit, and beauty. She is the girlfriend of Haruka and spends most of her time with her. She is also a student at Mugen Academy. She enjoys playing on her violin and hopes to become a professional violinist one day. Her other hobby includes painting the scenery of the sea and beaches.

Michiru is first seen passing Mamoru, who bumps into her and knocks her hand mirror to the ground. She did not take offense but wondered whether he had been a prince in his previous life, which surprised Mamoru. She explained that her mirror had the ability to reveal one's past life. She soon left with Haruka. Later that night, Usagi heard a violin in the distance and went to investigate, which caused Michiru to cease her melody. She stared at Usagi coldly and warned not to interfere.

A few days later, Michiru had offered two tickets to Mamoru to go and watch her play her violin at a concert. She played beautifully until she had detected evil nearby and left the stage. That night, she and Haruka found Chibiusa alone and offered to take her home in their helicopter. When asked whether she, too, had an amulet, she showed Chibiusa her mirror; stating it was her own special treasure called a talisman.

In Act 29, Sailor Neptune used her Deep Submerge attack to save Sailor Chibi Moon from Mimete's Charm Buster attack and finally revealed herself and what she represents as a Sailor Soldier of the Outer Solar System. Some days later, she reappeared alongside Sailor Uranus and Sailor Pluto and bowed down before Sailor Moon, who had become Princess Serenity. She was then hypnotized by Cyprine and forced to fight against the Inner Senshi.

After being released by Sailor Moon, she was surprised to see her Deep Aqua Mirror resonate with the Holy Grail, enabling Sailor Moon to become Super Sailor Moon. She admitted that her talisman had reacted in such a way only once; back when Silver Millennium was on the verge of annihilation at the hands of Queen Metalia. It had then resonated to awaken the last Sailor Senshi, Sailor Saturn. Agreeing with Sailor Uranus' plan to kill Hotaru to prevent the Senshi of Ruin and Rebirth from awakening a second time, she left to go the Hotaru's home. She was shocked to see Sailor Chibi Moon go in; just as Hotaru was being fully taken over by another female entity that she came to realize was not Sailor Saturn but someone else altogether. She was unable to save Chibiusa's Silver Crystal and spirit being taken by Mistress 9.

She left Usagi's disheartened team and went with Uranus and Pluto to prevent Mistress 9 from achieving her evil goals and the awakening of Sailor Saturn by destroying Hotaru. Noticing that the four Inner Guardians were in trouble, she used her magic mirror to emit a strong blast of seawater at Witches 5, releasing them from the sticky goo. She said that she had come to help, as she was also a Sailor Guardian. Her connection with the others had caused the Holy Grail to appear and for Sailor Moon to evolve into her much stronger Super form. Neptune then went with Uranus, Pluto and Super Sailor Moon to find Hotaru. She assured Super Sailor Moon that she, too, felt alone and insecure as she was always far away from the people of the Moon Kingdom, but simply seeing the forms of her dear queen and princess was the light that guided her forward. The elevator picked up speed and she was confronted by Souichi Tomoe, who said that his Daimon was hungry. While holding some off, she urged Super Sailor Moon to get her scepter. She saw Super Sailor Moon reluctantly destroy the vile being that had once been Hotaru's father. As Mugen Academy started to break apart, she was saved from the debris by Sailor Pluto using her Garnet Orb to create a triangular shield around them.

As Mistress 9 began to grow more powerful, Sailor Neptune ran towards her and used her mirror to enshroud Mugen in a dome-shaped barrier, vowing to defend the world that gave birth to her new queen. To maintain the shield, she was unable to help Sailor Moon stop Mistress 9 from absorbing the spirits of the Inner Guardians, but showed relief when they were returned by Hotaru's brave consciousness. Unfortunately, the shield was eventually broken by Pharaoh 90 and she fell. She was then glad to see Sailor Chibi Moon, safe and sound, attacking Mistress 9 directly. Neptune had lent her strength to the Holy Grail but was astounded when an additional Holy Grail appeared before Sailor Chibi Moon, who used it to evolve into her own Super Sailor form. When the combined attacks of Super Sailor Moon, Super Sailor Chibi Moon, the Inner Guardians, and Tuxedo Mask all failed, she watched helplessly as their strength was sapped from each of them.

As Pharaoh 90 grew in both size and strength, she suddenly noticed the Deep Aqua Mirror glowing aqua-green. She watched as a purple glowing orb of light rose up, revealing the Guardian of Ruin herself. Sailor Saturn said how she was to swing down her Silence Glaive, Neptune immediately expressed her horror for the scythe of the Goddess of Death. However, she could do nothing as Sailor Saturn unleashed her strongest and most deadly attack yet-Death Reborn Revolution- and began obliterating all of the traces of Pharaoh 90 and the world by swinging down her Silence Glaive on its sharp edge...

She seems to possess certain mystical abilities related to the seas and the future; psionic abilities that are somewhat similar to those of Rei. By psionically feeling the roughness of the sea, she can tell whenever there is danger near or see vivid visions of what's to come.

She can also utilize her hand-sized magic mirror to see another's past life, uncover the weaknesses of adversaries or see certain magical beings or reveal hidden locations.

Her powers are much stronger when she is transformed into the Guardian of the Deep Seas.

Sailor Neptune has the power to control and manipulate the seas and oceans and mold them into varied shapes and forms, as well as draw strength from her own homeworld of Neptune. She has the ability of foresight.

Using the Deep Aqua Mirror, she can weaken enemies, reveal enemy hideouts and hidden truths, and erect a strong teal-shaped shield. She can even use her violin to emit unusually strong hypersonic waves or even violent tidal waves or tsunamis to wash away her enemies in one sweep. Her mirror can be used to create a very strong dome-shaped shield in conjunction with the other two talismans. 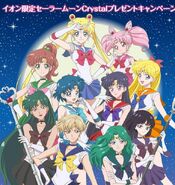 Michiru and Haruka from the May 2016 Otomedia Issue

Retrieved from "https://sailormoon.fandom.com/wiki/Michiru_Kaiou_/_Sailor_Neptune_(Crystal)?oldid=240611"
Community content is available under CC-BY-SA unless otherwise noted.