Mayumi Osaka has short wavy red hair and blue eyes like her daughter. She wears a black and yellow dress with earring to match and a brown beaded necklace.

At the start of the series, Jadeite sends the youma Morga to the human world to rob women of their energy. Morga assumes the form of Mayumi and leaves her bound and gagged in the basement of her shop, but is later destroyed by Sailor Moon. Mayumi is presumably freed after this. 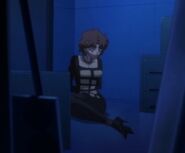 Mayumi locked in the basement

Retrieved from "https://sailormoon.fandom.com/wiki/Mayumi_Osaka_(Crystal)?oldid=210539"
Community content is available under CC-BY-SA unless otherwise noted.