His name, just like the girls, carries a pun. His surname "Chiba" means local and contains the kanji 地 (chi) which also appears in the word "Chikyuu", the Japanese name for Earth and 場 (ba), meaning place or location.

His given name "Mamoru" (衛) means to protect.

So the pun in his name is loosely "Earth Protector", "Local Protector", or simply "Protector of Earth".

Yuga Yamato as Mamoru Chiba.
Add a photo to this gallery 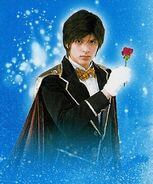 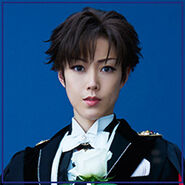 Retrieved from "https://sailormoon.fandom.com/wiki/Mamoru_Chiba_/_Tuxedo_Mask_(Sera_Myu)?oldid=228373"
Community content is available under CC-BY-SA unless otherwise noted.