Mamoru has short neat black hair and deep blue eyes. He usually wears his school uniform and occasionally glasses. Though, the glasses he only wears them when reading. He usually has a neutral face, making it hard to tell what he's thinking. He stands at about 175 cm or 5 feet 9 inches.

Mamoru was an only child and had lived with his parents until the day of his sixth birthday when all three of them had been involved in a car accident, killing the parents but leaving Mamoru as the sole survivor. However, the incident gave Mamoru retrograde amnesia, leaving him unable to remember anything about his life before the car accident.

He did, however, constantly have dreams about a mysterious girl begging him to find something called the "Silver Crystal". Believing this Silver Crystal would help him restore his memories, Mamoru would adopt the persona "Tuxedo Mask" and seek out the crystal for himself.

When Usagi is upset about her grade on her last English test, she crumbles up the paper and throws it behind her, not realizing Mamoru was standing behind her. He complains to her, while making fun of her hairstyle and throws her test back at her. Usagi begins to complain to him, and they suddenly stare at each other in awe. Mamoru gives Usagi her test back and she walks off, thinking how her heart is beating faster, though outwardly complaining how strange it is that he was wearing a tuxedo in the afternoon. Mamoru then acknowledges the Jewelry store, OSA-P, wondering if it might have the mighty Silver Crystal he is seeking.

A few weeks later, Mamoru is enjoying a romantic date with Usagi when his kiss is interrupted by the arrival of a little, pink-haired girl who falls on top of him. He is surprised when the girl introduces her as "Usagi" and demands that Usagi hand over the Silver Crystal she has in her possession.

Mamoru awakes from a vivid dream showing the whole world in utter devastation and destruction, which leaves him greatly concerned. He recalls the shadowy form of a female person holding a long sickle-like weapon and wonders who it could be.

In "Infinite Labyrinth, Part 1," he takes Chibiusa's lifeless form to his apartment and links his vital life energy with hers to keep her body alive. He soon realized that her body began to grow slightly warmer, as he learned that someone was protecting her spirit.

He noticed Hotaru's spirit outside his window and saw her return the Silver Crystal and Chibiusa's spirit to her. He watched as she Chibiusa and Hotaru had a heartfelt and tearful reunion until she faded away. Tightening his fist, he asked a saddened Chibiusa whether she was ready to help and fight with Sailor Moon. His question encouraged Chibiusa, who said that she would not cry anymore, that she was a fellow Sailor Guardian. After transforming into Sailor Chibi Moon, she thanked him for looking after her, but now it was her turn to do the same. He transformed into Tuxedo Mask and followed her to fight alongside Sailor Moon the four other Inner and three Outer Guardians.

Mamoru is capable of healing without needing to transform. He is also capable of having premonitions of impending danger. Mamoru shares a strong telepathic connection with Usagi. With some effort, he can directly communicate with her without a communication device. When Chibiusa lost her soul to Mistress 9, her heart stopped beating and Mamoru linked his vital energy with her to keep her body alive until her spirit was returned. 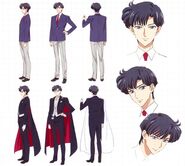 Mamoru as a child

Retrieved from "https://sailormoon.fandom.com/wiki/Mamoru_Chiba_/_Tuxedo_Mask_(Crystal)?oldid=239721"
Community content is available under CC-BY-SA unless otherwise noted.