Start a Wiki
"I am the Pretty Guardian who fights for Love and for Courage. I am Sailor Jupiter! I'll fill you regret, it'll leave you numb!"
— Sailor Jupiter's stock introduction

Makoto: Makoto's first name in Japanese is written in hiragana as "まこと", which can be read as "実", which can mean "trust" or "sincerity" in Japanese.[2][3] Originally, it was "Mamoru" meaning "to guard/protect".

Kino: The kanji of "Kino" (木野) can translate to "wood field" or "tree field."

Her name completely in hiragana would be "きのまこと" (Kino Makoto).

Makoto is a teenage girl who fair skin and a slim complexion, though she is slightly more muscular than most of her fellow Sailor Senshi. She has big green eyes, long reddish brown wavy hair that she usually keeps tied up with a ponytail holder with two green balls, and is almost always shown wearing her pink rose earrings. She is also the tallest out of the Inner Sailor Senshi, standing at 168 cm or 5 feet 6 inches.

Sailor Jupiter wears a sailor suit with two colors: green (scarf, boots, skirt, choker, the gem of the tiara, the button of front bow, end of sleeves on gloves) and pink (both bows, earrings). The rest of her outfit is white. Her tiara is the same base color as the rest of the Sailor Senshi's; gold. She is also seen wearing a light blue hair accessory as well as a pair of pink rose earrings.

As Super Sailor Jupiter, she wears an upgraded version of the Sailor Jupiter sailor uniform. The entire uniform is the same. The only things that have changed are the length of her back bow and the shape of the button on her front bow (circle to the heart), along with a yellow star added to her choker. Her boots are also the same.

As Eternal Sailor Jupiter, she wears an upgraded version of the Super Sailor Jupiter uniform. The scarf is still dark green, along with the first layer of her skirt. The second layer of the skirt is transparent green. Her front bow remains pink, while the back bow changes from pink to light green and has ribbons of the same color flowing from it. Her puffy white sleeves are now replaced with transparent green big puffy sleeves with the remainder of the sleeve being two dark green puffs. Replacing the usual button on her front bow is a green star-shaped button, the oval-shaped gem on her tiara is now a green star-shaped green gem, and the plain collar now has a green star attached to it. Instead of the original dark green tie-up boots, Eternal Sailor Jupiter now has a pair of white boots with a strip of dark green at the top with a gold star in the middle. Jupiter is still wearing her hair accessory but her pink rose earrings have been replaced by green dangling 5-pointed star earrings.

Sailor Jupiter is also the princess of the planet Jupiter. She wears a green gown with two green roses, one on each side, that goes down to her toes and splits in two right above the knee and trails back. Her hair is tied up with a green ribbon with a pink rose in the middle. She has a green choker that is tied in a bow a the back, with the streams running down her back. Her symbol is always on her forehead. In addition to the choker, she also wears a necklace. She also has green heels with a strap across the ankle. She dwelt in Io Castle.

Makoto was an only child who lived with her parents until one fateful day when her parents died in a plane crash, leading her to develop a fear of airplanes. She would learn how to take care of herself and develop impressive cooking skills in the process.

Makoto would grow to be a very tall girl for her age with impressive strength for her gender, leading most to assume she was a delinquent and avoid her.

One day, Makoto tried to confess her feelings to a boy she liked, but he rejected her. She would later transfer schools, partly because of heartache, but also because she felt a greater purpose calling her elsewhere.

Makoto's first appearance in the Sailor Moon series was at the end "Act 4 - Masquerade Dance Party". Here, she is seen walking outside at night in the rain. However, she makes her formal appearance in the following act, "Act 5 - Makoto, Sailor Jupiter". At the beginning of the act, she saves Usagi from getting hit by a car. After doing so, Makoto tells Usagi to be more careful in the future and walks away. At school, Makoto accidentally bumps into Usagi and gets yelled at by a teacher who tells her to wear a proper uniform. As Makoto was setting up for lunch, she protects Usagi from an oncoming baseball. as Usagi was spying on her. She throws the ball far and Usagi joins her for lunch.

In Act 17, Makoto falls under the influence of a mysterious illness spreading around Tokyo. After being escorted home by Ittou Asanuma she reveals her identity as a Sailor Senshi before fainting from exhaustion. Makoto is then attacked by a Droid Petz created. She transforms and battles Petz but finds herself unable to overpower Petz's attack as she's using the Dark Crystal to amplify her powers. Makoto is then kidnapped by Rubeus and held hostage on Nemesis until Sailor Moon rescues the group in Act 22.

Makoto Kino, as Sailor Jupiter, becomes in Super form. When during a attack, her soul gets taken along with the others.

By the help of Hotaru(Sailor Saturn) gets her soul back and the other too.

Makoto can transform into Sailor Jupiter by saying "Jupiter Power, Make Up!", increasing her already high combat prowess with attacks centered around lightning and nature.

Makoto was present in the original proposal for the Codename: Sailor V anime; however, she was called Mamoru Chino, a name similar to Mamoru Chiba. It was later confirmed this character was eventually turned into Makoto, her character was meant to be not only tough but the leader of a female gang and a smoker. Also, her hair was straight instead of wavy.'

Makoto's cameo at the end of Codename: Sailor V: Chapter 16

Makoto telling Usagi to be careful. 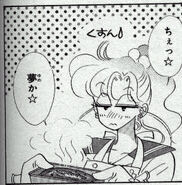 Makoto and her Japanese style meatloaf.

Makoto expresses her fear for airplanes 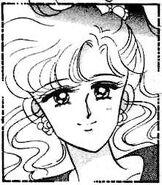 Makoto's concept art.
Add a photo to this gallery

The Inner Senshi on the cover of volume 10 of the Kanzenban manga.
Add a photo to this gallery

Retrieved from "https://sailormoon.fandom.com/wiki/Makoto_Kino_/_Sailor_Jupiter_(manga)?oldid=229565"
Community content is available under CC-BY-SA unless otherwise noted.