"I am the Pretty Sailor Guardian of Love and Everything Little, Sailor Luna! In the name of the Moon, I'll punish you!"
— Sailor Luna's stock introduction

Luna is a talking black cat that appears from the very beginning and advises Sailor Moon and the Sailor Guardians as well as trains them. In the mid-series, Luna is bathed with the Silver Crystal, and gets the ability to transform into Sailor Luna, and having a human form also.

As Luna, she remains a cat, albeit a plush cat, with dark blue fur as opposed to black. She has a crescent moon emblem on her forehead, and she wears a gold collar with a crescent moon charm. Luna has large, blue eyes, and her ears are slightly colored with a deep purple.

While in her human form, Luna is depicted as a young child. She has dark blue hair, a trait that is carried over when she transforms into Sailor Luna. She also wears a dress made from yellow and purple fabric and her bracelet, which she uses as her transformation device.
In her Sailor Senshi form, she wears a traditional Sailor Senshi uniform, although unlike the other Sailor Senshi she does not have a chest protector. Her hair is dark blue and is tied up in two ponytails, and she also gains cat ears and a tail. Her tiara gem is blue, and she wears crescent moon earrings. On her dress, her bow is yellow and is similar to the necklace she wears as a cat. She wears white gloves, along with a shirt, and her skirt is fully yellow, while the bottom part is colored purple, and the top of her leotard and the skirt are divided by a belt-like which has a crescent moon in the middle. Sailor Luna's boots are fully blue. Her sleeves, gloves, and boots are all lined with fluffy pink trimmings.

In her first form in the live-action series Luna is a living plush toy. She came down from the moon to help guide the Sailor Senshi, but she had forgotten much of her past until she was showered in the light of the Silver Crystal. In her plush form, Luna can produce items from the Crescent Moon on her forehead and detect both Senshi and youma. She often accompanies the Senshi by tagging along in their bags.

Once Sailor Moon turned into the Princess, Luna is given a human form due to the presentation of the Silver Crystal. Its power also allows her to transform into Sailor Luna, by pulling out a cellphone and pressing the buttons 6-7-2 on it. The Sailor Senshi seemed confused at first by the appearance of the girl and she only reveals her identity to them when she transforms.

However, Luna is unable to keep her transformation in certain circumstances. For example, if she sneezes or gets knocked out, she automatically reverts to her toy cat form. Also, she is still, in a way, a cat during her human form. This is shown when she is easily scared off by a dog and gets distracted when a bunch of bouncy balls is released in a toy store, much like any other cat would. Her role in the Tsukino family is much like that of Chibiusa's: she appears and no one seems to question it.

In the Special Act, Luna appears in the beginning, sensing something wrong, along with Rei, as well as in the end as the flower girl for Usagi and Mamoru's wedding. 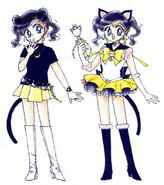 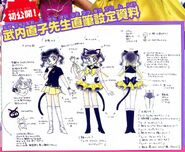 Another official poster based on all Luna's counterparts.