Wearing band-aids on her forehead, Usagi called her crescent moon a "bald-spot"

Luna is a talking black-purple cat that advises Usagi Tsukino/Sailor Moon and the rest of the Guardian Senshi through the anime series. This is the first anime depiction of the original manga character.

In the future, it can be assumed she marries Artemis, and they have Diana. Sailor Mercury also recreates Luna's likeness in the form of Luna-P.

Luna has the ability to perform a midair somersault to summon items for the Sailor Senshi (such as their Transformation Pens, Ami's supercomputer, and Usagi's Disguise Pen, as well as the Moon Stick.) Luna also has sentience as well as the ability to speak, which she must frequently hide to assume the identity of a normal cat. Luna is also very agile, able to jump quite high, and can use her claws to scratch enemies and cause damage, although this is usually minimal. Luna is also able to cause her own crescent moon mark to glow, in order to reawaken the Sailor Senshi's powers.

Luna lived on the moon with Artemis as advisors to Queen Serenity at the palace in the Moon Kingdom. One day, the forces of the Dark Kingdom, lead by Queen Beryl and Queen Metalia, invaded the kingdom. Luna and Artemis spread the word. Later, after seeing Princess Serenity and Prince Endymion die from a blast from Queen Metalia, Luna cried. Despite her plea not to use the crystal sacrifice herself to defeat the Dark Kingdom, the Queen does so and resurrects her daughter and everyone else. Later, the Queen sends her daughter, the Earth Prince, the four princesses of Mercury, Mars, Jupiter and Venus, and the entire court to be reincarnated on Earth in the future. Before dying and sending them to Earth in suspended animation, the Queen instructs Luna and Artemis to find the princesses so that they can become the future Sailor Senshi. At some point upon their arrival on Earth, Luna and Artemis split up so they can find the princesses faster. Luna was saved by Usagi, who was the reincarnation of Princess Serenity, when some boys were picking on her. Usagi noticed the bandage on her forehead. When she took it off, it revealed the credentials moon birthmark. Later, at her home in her room, Usagi discovered Luna standing there. She introduced herself to her and told her about her destiny as a future hero.

Throughout the season, Luna assists Usagi in finding and awakening the remaining four Sailor Senshi as well as the Moon Princess. Luna helps awaken Ami Mizuno, Rei Hino, and Makoto Kino as Sailor Senshi by granting them Transformation Pens. She also grants Ami her supercomputer as well as the Disguise Pen to Usagi.

Luna also communicates to a mysterious figure in the Sailor V arcade game (later revealed to be Artemis), who she converses with to find out information about the Dark Kingdom.

Near the end of the season, she and Artemis locate the Dark Kingdom's hideout in D Point, but sustain injuries from Kunzite are unable to join the Senshi. During the final battle, Luna begs Usagi to not release the power of the Silver Crystal or she will die. After the final battle, she hopes that the Sailor Senshi will be able to meet and befriend each other once again, having lost their memories.

Luna is forced to reawaken the Sailor Senshi after Ail and An begin draining energy. She also tries to save Usagi after a Cardian destroys her brooch, and they end up in a void, where Usagi apologizes for always putting Luna in danger.

Luna worries for Usagi after her transformation device is destroyed. 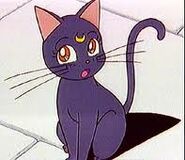 Luna after slamming into a sliding glass door

Luna with Artemis and Diana

Luna as a human with Kakeru.