Adviser and Guardian to Sailor Moon

Wearing band-aids on her forehead, Usagi called her crescent moon a "bald-spot"

Luna is Usagi's black guardian cat, as well as her and the other Sailor Senshi's adviser.

Luna appears as a black blue cat with pink ears and a crescent moon on her forehead. Also, even though the second anime is supposed to be similar to the manga, Luna has red eyes like her original anime counterpart (Blue later on in Sailor Moon Eternal).

Luna first appears in episode one. In the first scene she appears in, Usagi accidentally steps on her. After realizing what she did, Usagi fawns over her, apologizes and removes the bandages covering the crescent moon symbol on Luna's head. They then stare at each other for a moment until Usagi realizes that she is late to school and leaves. Later when Usagi is at Game Center Crown, Luna sees her again. Finally, she appears once again in Usagi's room and wakes up Usagi, who was sleeping at the time, by scratching her face. When Usagi is awakened, Luna tells her that she is destined to become a Sailor Guardian and gives Usagi the brooch that allows Usagi to transform into Sailor Moon.

After Usagi transforms, Luna leads her to where Morga is. During Sailor Moon and Morga's fight, Luna gives Sailor Moon tips on what to do to harm her enemy and teaches her a new attack called Moon Tiara Boomerang. At the end of the episode, Luna is seen with Usagi, who realizes that the events from the day before actually happened and that she wasn't dreaming. 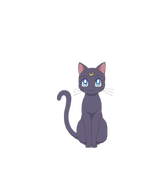 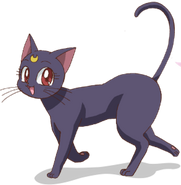 Retrieved from "https://sailormoon.fandom.com/wiki/Luna_(Crystal)?oldid=240379"
Community content is available under CC-BY-SA unless otherwise noted.