Leader of the Shitennou

Kunzite is the 4th and most powerful general of Queen Beryl. He was originally a general to Prince Endymion.

Kunzite has long white hair. He wears a white suit and gloves and a cape. He is the tallest of the Shitennou, and his estimated age is 25-26, as stated in the Materials Collection.

In Codename: Sailor V, he didn't directly act against Minako during her battle against the Dark Agency, he was stated as being the superior of the Dark Agency's leader, Phantom Ace a.k.a. Danburite.

In Pretty Soldier Sailor Moon, he is the last of the Shitennou to appear, and he is also the most powerful.  He is the commander of the Middle Eastern division of the Dark Kingdom. He appears after the death of Nephrite. He advises Zoisite to be careful and to think his plans through better than his contemporaries Jadeite and Nephrite.

After Zoisite's failure and subsequent death, he is left alone to fight against the Sailor Senshi. He is determined to locate the Silver Crystal but feels that he must kill the Sailor Senshi and their princess first (by this time, Sailor V had arrived and was posing as the princess).

In Act 6, he appears and seems to be amused by Tuxedo Mask’s announcement of the Silver Crystal's existence to the citizens of Tokyo. In Act 9, he causes a massive blackout throughout Tokyo and waits for the Sailor Guardians at the top of Tokyo Tower.

The Sailor Guardians confront him there, but he absorbs their attacks and returns them at Sailor Moon. Tuxedo Mask takes the blast for her, and in Act 9, they remember their past. Sailor Moon transforms into Princess Serenity and begins to cry for Tuxedo Mask.

Kunzite then returns to the Dark Kingdom, where he resurrects the other fallen Shitennou. They live just long enough to remember their past lives serving Endymion and then melt away once more to revert to crystals. He then captures the wounded prince and takes him back to the Dark Kingdom, knowing that he has found the one who he truly serves. In Act 10, he secretly follows Queen Beryl down a hall to see Queen Metalia, where he is amazed by how much power the great ruler has accumulated.

He confronts Queen Beryl, asking what she intends to do with Endymion's body. The evil Queen forms a stone on his forehead, reminding him that he must obey her because he and the other Shitennou had pledged their eternal loyalty to her alone. She then orders him to steal energy from humans in order to draw out the Sailor Senshi, so that he may steal the Silver Crystal. Kunzite returns to Tokyo and begins blasting people with ice, threatening to freeze the entire city.

Sailor Moon and the Sailor Guardians appear, and Kunzite tries to steal the crystal. Sailor Moon ascends into space, only to be followed closely by Kunzite. She tries to gain information on the state of Tuxedo Mask, but Kunzite tells her that if she gives him the Silver Crystal, he will return Tuxedo Mask's body. She does not want to attack him at this point because she has not yet found out anything about Tuxedo Mask, but the other Guardians arrive and kill Kunzite with Sailor Planet Attack.

He is reduced to nothing but the stone after which he is named and falls at Queen Beryl's feet. She then gives the stone, along with the stones of the other fallen Shitennou, to the revived evil Prince Endymion. In act 12, when Endymion is resurrected, the stone Kunzite awakens, and Kunzite appears to Mamoru to tell him how to defeat Metalia. His stone then shatters. His spirit appears a little more time with the Shitennou to support Mamoru.

Art of Kunzite from the Materials Collection 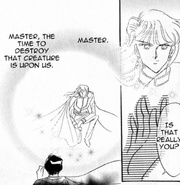