Kunzite was the fourth and most powerful general of the Shitennou.

Kunzite has long white hair and light tanned skin. Like the other generals, he wears a gray uniform with blue trimming, with white gloves, but he wears a white cape and his epaulets have a blue gem on top..

In the anime, Kunzite's first appearance was during Nephrite's turn to gather energy for Queen Beryl.

After Nephrite's death, he appeared from time to time during Zoisite’s saga where he was attempting to obtain the Rainbow Crystals. When he challenged Tuxedo Mask for the crystals, Kunzite appeared and took them. When Zoisite was defeated by Sailor Moon and killed by Queen Beryl for disobeying her, Kunzite fought against the Sailor Guardians but Sailor Moon defeated him with Cosmic Moon Power.

After Zoisite's death, Kunzite attempted to find Sailor Moon, often turning people into monsters to do so, fighting alongside the brainwashed Tuxedo Mask, albeit begrudgingly. Like Zoisite, Kunzite did not bother creating civilian identities, instead operating in the background of Youma plots. While he and Tuxedo Mask still sought out the Silver Crystal, he came to despise Tuxedo Mask's methods of holding back when fighting Sailor Moon.

In the penultimate episode of the first season, he attacks the Guardians in a cave, where they are transported to the past. Kunzite attacks Luna and Artemis, but when the Guardians return, all are defeated by Kunzite, who gets stronger every time they see him. Sailor Moon uses Cosmic Moon Power and reflects one of Kunzite's energy blades at him. This finally kills Kunzite, and as he dissolves into nothingness, he states that he would be joining Zoisite in the afterlife very soon.

Kunzite was the most powerful of the four Shitennou. He has power over dark energy, through which he can use as energy blasts, energy blades, or a energy dome, which he used to trap the Sailor Senshi in. 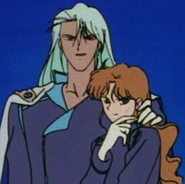