Act 13 - The Last of the Four Heavenly Kings, Kunzite, Appears

Kunzite is one of the four Shitennou.

In Act 13, a man named Shin meets Usagi and Mamoru, telling them that he has completely lost his memory, but that he can remember them, and that he likes flowers, nature, and the ocean. Usagi wants to help him, so she and Mamoru try to gather things that he likes to help him regain his memory. He does regain his memory - but not through Usagi's help. Needing more help to capture the princess, Queen Beryl awakens Shin as Kunzite, the last of the Shitennou. After being awakened by Queen Beryl, Kunzite turned out to be the most cunning of the Shitennou, manipulating both applies and enemies alike. He also turned out to be the most vicious, with the most success at defeating the Sailor Senshi in battle. One of his main sources seems to be provoking Nephrite when left to his own devices. Kunzite is very intelligent, but he does not hold the respect for Queen Beryl that the other Shitennou have. He seems to humor her, waiting for Queen Metalia's arrival. He is very powerful - he has a telekinetic ability and a powerful sword. He can pull a few strands of his hair, which he uses to transform people into youma. He also can turn the Sailor Senshi into dark soldiers who work for the Dark Kingdom - he first tried to turn Sailor Moon into a youma, then he turned Sailor Mercury into Sailor Mercury. He was quite fond of her but she seemed to develop her disregard for authority. Kunzite later realized Sailor Venus was not the true moon Princess. Because Zoisite's attempts to bring back his memories, Kunzite remembers Endyimon and what he did as well. As a result, Kunzite made his mission to get revenge on the Prince who felt threw away the Earth for Serenity. 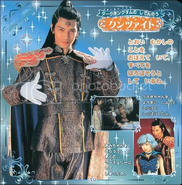 Add a photo to this gallery
Dark Kingdom
Retrieved from "https://sailormoon.fandom.com/wiki/Kunzite_(PGSM)?oldid=237457"
Community content is available under CC-BY-SA unless otherwise noted.