Kousagi Tsukino is a character who only appears in the Materials Collection's side story, and she is the second daughter of Usagi Tsukino and Mamoru Chiba.

Kousagi has bright pink hair styled into four cone-shaped odangos with pigtails that curl at the ends and blue eyes. Her civilian outfit consists of a short summer dress with ball-shaped patterns on it and dark-colored sandals.

Her Sailor Uniform consists of a white leotard with a chest bow and a white bunny head brooch affixed to it. Her sailor collar had three stripes, her tiara had a white bunny head, her earrings were bunny head studs, and she wore a choker with a bunny head motif. There were bunny head clips in her hair and bunny head coverings that cover all four of her cone-shaped odangos. She wore elbow-length gloves with padding, her skirt was featured two belts with a bow at the back. Her footwear consisted of knee-high heeled boots with circular padding at the borders.

Kousagi appears in the side story Parallel Sailor Moon where she is seen chasing Ami Jr, Rei Jr, Mako, and Mina. They complain about having to let her stay with them but promptly leave her behind. Before deciding who would look after Kousagi with a game of rock, paper, scissors, they hear Kousagi scream that there's a pink cat on her.

They force her to bring the cat despite it being one of her biggest fears and make her carry their bags. After running off again, Kousagi is left trying to catch up then the four girls see a bright light that they believe is a UFO or meteorite. They then suddenly feel that the earth is in danger in their own ways and also realize they have to protect Kousagi. Kousagi is then hit by something and finds herself with the pink cat as a human. The cat tells her that she must transform and save the planet and that she can call the other girls her underlings. Kousagi agrees and meets up with Ami Jr, Rei Jr, Mina, and Mako who are now also Sailor Guardians.

The bright light is revealed to be a herd of rabbits and Kousagi summons a horde of cats to become a giant lynx and eat the rabbits. The five girls then wake up to an annoyed Setsuna, Haruka, and Michiru who chide them for falling asleep after arriving late to their cooking class. Afterward, Kousagi questions whether it was all a dream or not. 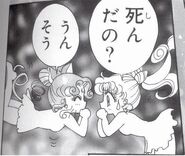 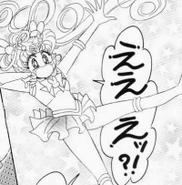 Kousagi in her Sailor Guardian form.

Kousagi's encounter with a cat
Add a photo to this gallery

Retrieved from "https://sailormoon.fandom.com/wiki/Kousagi_Tsukino?oldid=226205"
Community content is available under CC-BY-SA unless otherwise noted.