Koan is the youngest of the Spectre Sisters who accompanied Rubeus to 20th Century Tokyo in search of the Rabbit and the Silver Crystal.

Koan is named after Kooankou (紅安鉱), a mineral that is also known as Kermesite and Red Antimony. The "Kermes" part of Kermesite means "Crimson." The Kanji character that is missing is the character for a "mineral" or "ore." Kermesite is found in chocolate as well as other places.

Koan retains the same appearance in the anime as she did in the manga, albeit lacking her rose corsage on her neck. She wears a striped, pink bodysuit with a fluffy purple tutu and blue heels. She has wavy dark purple hair that she lets fall her back, but it is shaped in two points, and she wears a blue gem above her forehead. Like all members of the Black Moon Clan, she has the Black Moon symbol on her forehead.

After she is healed by Sailor Moon, she wears casual outfits and no longer has the Black Moon symbol on her forehead. Her primary casual appearance in both Episode 70 and 71, is a black sleeveless turtleneck, a long light purple skirt, and black flats.

Koan was the most conceited and most ambitious of the Spectre Sisters, as well as the most developed in the anime. She was constantly making up her face, bemoaning her looks, teasing her elder sister Calaveras, and shopping as a human for new cosmetics and clothes. Koan's greatest dream was to become the Queen of Crystal Tokyo - with a King Rubeus by her side. Much of this fantasy was fueled by her belief that Rubeus loved her as she loved him, a fantasy that Rubeus did nothing to discourage.

As the first sister to appear, Koan became the one most engaged in finding Chibiusa (as opposed to simply capturing Crystal Points, which she only did once). This was a job that Rubeus often trusted her with, and the more she failed, the more determined she became to kill Chibiusa and win Rubeus's love.

Koan did not have the same respect for her elder sisters as Berthier, who always referred to Calaveras and Petz as "oneesama" (御姉様). Despite this, she seemed to truly love her determination to purify the others as well.

Koan is the first to encounter the Sailor Guardians. She attacks by shooting Dark Fire upon her enemies.

Koan encountered the Sailor Guardians four times. The first was when she tried to capture Chibiusa Tsukino for Rubeus, but was fought off by Sailor Moon using her scepter. The second time, she tried to take over a crystal point (Hikawa Shrine) with the help of her Droid, Dumbull. Anyone defeated by Dumbull fell under Koan's spell, but Sailor Mars defeated Koan, setting her on fire. The third time, she and her sisters Berthier, Calaveras, and Petz fought the Sailor Guardians but were forced to retreat when Sailor Moon defeated Rubeus.

Koan fell in love with Rubeus at one point, and when he sent her on a mission to take over Rei Hino's temple again, she gave him some cologne, but he was uninterested and crushed it in his hand. Later, he said she was looking "beautiful as always", leading her to believe that he was still in love with her. While chasing after Chibiusa, Koan encountered Rei and Yuuichirou and fought them. Yuichiro jumped in front of Rei to protect her from Koan's Dark Fire. Rei transformed into Sailor Mars. With the help of Tuxedo Mask, she defeated Koan with Burning Mandala. Rubeus appeared and dumped Koan, kicking her out of the team for failing to capture Chibiusa. Koan went on a rampage, and the Sailor Guardians attempted to fight her off, but Sailor Mars protected her from Sailor Jupiter's attack and convinced her to turn good. Sailor Moon used a new technique, Moon Crystal Power, on her to eliminate the last of the negative energy inside Koan, and from here, she opened a cosmetic shop. In the anime, she is kind, jealous and somehow strong.

Koan also convinced Berthier to turn good as well when she attempted to freeze herself with her power. She was later captured along with Berthier by Calaveras and Petz in an attempt to turn them evil, but they turned good in the end, and the four decided to run a cosmetic stand together. 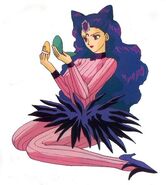 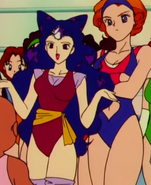 Koan and Dumbull in disguise.

Sailor Mars catching Koan.
Add a photo to this gallery

Retrieved from "https://sailormoon.fandom.com/wiki/Koan_(anime)?oldid=229184"
Community content is available under CC-BY-SA unless otherwise noted.