Start a Wiki
Koan is a member of the Spectre Sisters.

Koan is named after Kooankou (紅安鉱), a mineral that is also known as Kermesite and Red Antimony. The "Kermes" part of Kermesite means "Crimson." The Kanji character that is missing is the character for a "mineral" or "ore." Kermesite is found in chocolate as well as other places.

Koan's appearance bears the one on the anime, and also a manga. She has purple hair, which is up until her shoulders and has a dark crescent. Koan shares the same dress with the one on the anime, and manga, as the same colored pink top and pants, which had black lines going from top to bottom, and the whole top, and pants were divided by a black skirt. She also had a purple-like jewel on her head and the same shoes.

Koan eventually met her demise, along with her sister Calaveras, at the hands of Sailor Uranus' World Shaking attack. 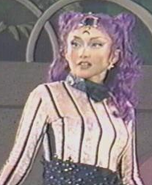 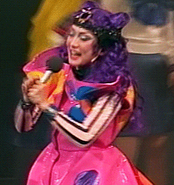 Retrieved from "https://sailormoon.fandom.com/wiki/Koan_(Sera_Myu)?oldid=225144"
Community content is available under CC-BY-SA unless otherwise noted.