Kenji Tsukino was Usagi's father in the present day. This is the first animated depiction of the original manga character.

In the beginning of episode 3, he is seen reading the newspaper about the "mysterious sleeping illness".

In episode 9, he falls under the effects of Jadeite's cursed clocks, and is shown running out the door, late for work, when Ami is talking to Ikuko.

His last appearance in the first series is in episode 45, where Usagi makes curry for her father, mother, and older brother, but comes out with terrible results.

Kenji's first appearance in the second series is in episode 50, where he and Shingo attend the new virtual theater.

His final appearance in the second series, as well as in the entire first anime series, is in episode 66, where Chibiusa becomes upset that Ikuko and Kenji will not be able to attend her class's party where they will be making curry. 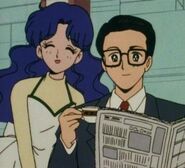 Add a photo to this gallery
Retrieved from "https://sailormoon.fandom.com/wiki/Kenji_Tsukino_(anime)?oldid=209827"
Community content is available under CC-BY-SA unless otherwise noted.